This Year’s Rockefeller Center Christmas Tree Is The Perfect Representation For A Long, Exhausting 2020 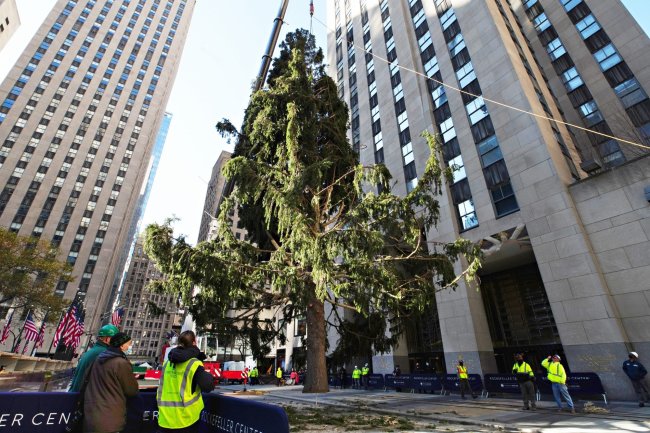 Nothing says the holidays like the lighting of the Rockefeller Center Christmas tree. Every November for 89 years, a tree is carefully selected from the tri-state area and donated to display proudly in front of the NBC 30 Rock building through the New Year. This year’s evergreen is a 75-foot-tall Norway spruce from Daddy Al’s General Store in Oneonta, New York, about 170 miles northwest of Manhattan. It arrived in the Big Apple with a police escort over the weekend and was hoisted by crane prior to be decorated. The only thing is, the tree is… well… struggling to transition, to put it lightly.

When it was finally finished, the official Rockefeller Center account posted a photo of the tree at full standing. Branches were mangled, holes in the pine needles were gaping and the visual it left was disappointing. Much like this year.

The internet caught sight of image and immediately had a field day. Of course, people began to ask questions as to why the mayor signed off on an expense like this celebration when small businesses are dying and the city is locked down, but others saw it as a glimmer of hope and joy. No matter which side of the fence people are on, they will not be allowed to attend the tree lighting celebration on Dec. 2 and crowds around the plaza will be strictly limited. Either way, it doesn’t look like you’ll be missing much and perhaps the city intentionally chose a tree that is so ugly that people will not want to gather. As someone who is openly pro-tree, I am equally as appreciative of the beauty of the tree as I am sad for it having to be chopped down. Either way, funny is still funny and Twitter had some great jokes, comparing it to the Christmas tree in Charlie Brown’s Christmas special.

Expectation What you get pic.twitter.com/MJ5JyOJoE3

This year Rockefeller Tree looks like it has Covid… pic.twitter.com/sbc9EOAMUg

the Rockefeller center tree looks like cynthia from the rugrats 😭

PEOPLE ARE BEING SO MEAN TO THE ROCKEFELLER TREE

Surely the crew will fill in the holes with the tree version of hair extensions, and a good fluff job will have it up to standard in no time, but it’s initial appearance could not have fit the narrative of a hard year any better.

The star was placed on top of the tree on Tuesday.

The 900-pound star is being placed on top of the Rockefeller Center Christmas tree right now. 🎄 pic.twitter.com/b11kiUa4IR