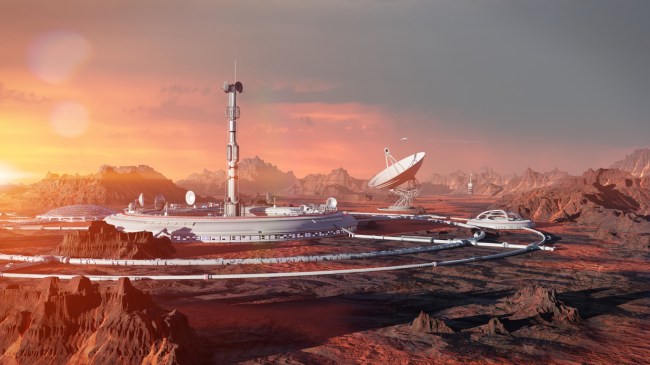 Russia plans to build a base on the Moon to track asteroids that are on a collision course with the Earth. Or that’s at least what the Russians say the lunar station will be used for.

Russia is in the planning phase of developing a lunar observatory that will track asteroids that could potentially slam into the Earth. Russia’s space agency Roscosmos stated the Moon base will be a part of the “global system for tracking asteroid and comet threats.”

The base will work together with spacecraft placed in Sun-Earth Lagrange points. According to Space.com, a Lagrange point is a “location in space where the combined gravitational forces of two large bodies, such as Earth and the sun or Earth and the moon, equal the centrifugal force felt by a much smaller third body. The interaction of the forces creates a point of equilibrium where a spacecraft may be ‘parked’ to make observations,”

Russia said the project will “bring scientific value and become and important instrument in defending earth from asteroids,” according to the Daily Star. The observatory will also study deep-space.

The permanent asteroid observatory will be powered by nuclear energy and be located on the southern pole of the Moon, according to reports. Humans will visit the base, but robots will be the permanent crew of the outpost.

“The location selected for the base is southern pole of the moon,” said Aleksandr Bloshenko, chief executive for science and advanced projects. “It has favorable relief and conditions: enough light for solar panels, constantly shadowed craters with ice reserves for fuel and raw material.”

While the ambitious project is touted as an Earth-saving venture, there is also another mission for the lunar base. The Moonbase will also be a place for Russia to test new and potentially dangerous technologies such as small-scale nuclear reactors, which makes sense because Russia doesn’t exactly have a perfect record with nuclear power.

Russia has already created human-like robots called Skybot F-850 or FEDOR (Final Experimental Demonstration Object Research). In August of this year, Russia sent one of its FEDOR robots into space to assist astronauts on the International Space Station (ISS).

“We have more or less chosen the platform for the future planetary robotic systems. It will be a wheeled walking cart that can either roll on wheels or step over obstacles,” Bloshenko said. “Another conceptual design is a centaur-like robot on a walking cart for non-trivial planetary tasks.”

This comes at the same time that President Donald Trump’s Space Force was approved a $2 billion budget over five years as part of the recently approved United States spending bill worth $1.4 trillion. The Space Force will protect U.S. assets in outer space, including the hundreds of satellites used for communication and surveillance.

“We’re leading, but we’re not leading by enough, but very shortly we’ll be leading by a lot,” President Trump. “The Space Force will help us deter aggression and control the ultimate high ground.”

“Space is not just a support function. It’s a war-fighting domain. We have to be prepared to fight, deter and win,” said a senior defense official according to Defense News. “With these changes, we need to adapt.”

Russia opposes the U.S. Space Force, and earlier this month, Russia’s President Vladimir Putin said: “The US military-political leadership openly considers space as a military theatre and plans to conduct operations there.”