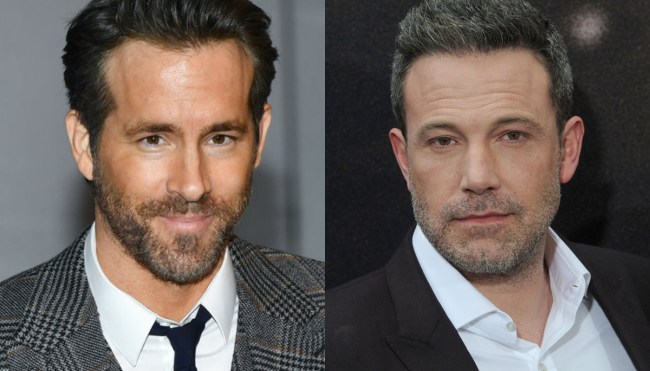 It’s hard to think of a single actor who has dominated life in recent years quite like Ryan Reynolds, who expertly bounced back from a career nadir that featured disasters like Green Lantern and R.I.P.D. with the Deadpool franchise and other successful projects on his way to becoming one of the most bankable (and likable) stars in Hollywood.

Given his A-list status, you’d be hard-pressed to find many people who wouldn’t recognize him in public. However, as he recently revealed, there are a few employees at a pizza joint he regularly visits in New York City who have convinced themselves he’s actually Ben Affleck—a misconception he says it’s too late to correct.

During an appearance on the Dear Hank & John podcast, Reynolds was asked if he’s ever been confused with another actor and said that there’s one group of people who are convinced he’s actually his Smokin’ Aces co-star, and his decision to not set the record straight has led to some slightly awkward exchanges:

“There’s a pizza place in the East Village in New York that I’ve been going to for years and they believe I’m Ben Affleck and I’ve never corrected them. I feel it would not go over well if I revealed that.

I also don’t accept anything. They’re not giving me free pizza. I do everything normal like everybody else. They just think I’m Ben Affleck. They’ll ask how J. Lo is. I’m like, ‘Great, good,’ get my pizza, and off I go.

What I think makes it so believable is that I look mildly put out by the fact that they’re asking me again about my life and my movies. When I leave, I think they sort of think, ‘I don’t think Ben Affleck is amused by us and our questions.’ I’ve got to be more chipper.”

That, my friends, is vintage Ryan Reynolds.