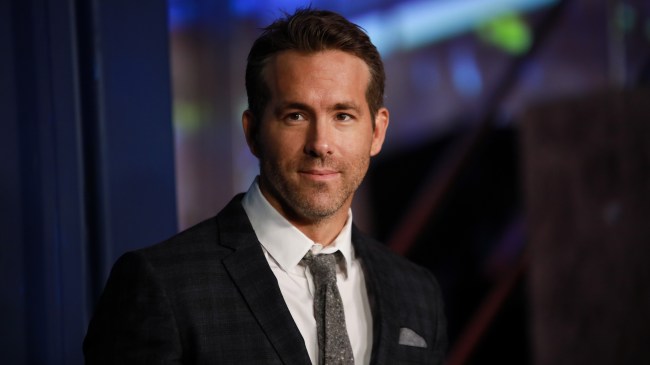 Just Friends carries a bizarre prestige here at BroBible, as most of us — particularly co-worker Cass — find it to be one of the more underrated comedies of its generation. As Cass and I were chattin’ about the movie this morning, I noted how it’s pretty remarkable that Reynolds has gone from being a B-list raunchy comedy lead to arguably one of the world’s biggest movie stars. Not only that, but he’s still largely maintained those comedic roots on his rise to international stardom.

What’s so great about Reynolds’ success in the last two decades is that he’s so clearly a guy who seems like he *gets it*. From his general personality — his habit of cropping his wife out of photos, his on-going banter with Hugh Jackman — to the characters he plays to the anecdotes about who he is when the cameras aren’t rolling, Reynolds is simply an easy guy to root for. I actually know this first hand as I met him at the premiere of Netflix’s 6 Underground and was truly blown away but how generous he was with his time with everyone around him. He was being dragged in dozens of directions by PR and press alike and still felt as though he was engaged with everyone he spoke to.

EXCLUSIVE: Ryan Reynolds Reveals Who Deadpool Would Drunk Text If He Could, Well, Get Drunk

Overly-long, word-count boosting story short, this latest story of Reynolds’ inherently good character should come as no surprise: following the production of Red Notice (which also stars The Rock and Gal Gadot), Reynolds sent over 400 Thank You videos to the crew.

The Hollywood Reporter has learned that there’s something Reynolds did not share on Instagram that day with his 36.5 million followers, and that is how he thanked the aforementioned Atlanta-based crew. Because the bubble required an extended period of isolation, Reynolds recorded close to 400 videos for crewmembers’ families, friends and loved ones.

Reynolds confirmed the gesture of gratitude and added that for those who didn’t have family, “I made videos for their dogs,” he said. “Morale was so low because everyone was in lockdown. They couldn’t go anywhere but work or the hotel. In some cases, their families were at home less than a mile away. I can’t imagine that kind of longing.” [via THR]

In addition to the personalized videos, which Reynolds said were “worth every second”, the Deadpool star also gave every crewmember a bottle of his Aviation Gin.

“Awesome group of people,” he said. “What they did was so hard.”

Still just 44-years-old, Reynolds is arguably about to enter an even more successful stage of his career.  Not only does he have *four* blockbusters on the way — Free Guy, The Hitman’s Wife’s Bodyguard, Red Notice, and The Adam Project — but news just broke last week that Deadpool is officially on his way to the Marvel Cinematic Universe as the writers of Bob’s Burgers have been tapped to pen the script for the third film in the beloved franchise.

We dove into the Deadpool news on the latest episode of the Post-Credit Podcast — talking how and when we expect Deadpool to appear and what his role will be going forward — so make sure to subscribe and check that out.