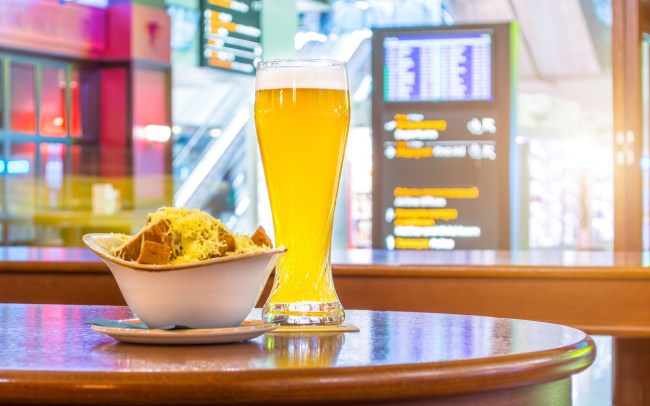 I’m sure there are some people out there who genuinely enjoy air travel. However, I’m willing to guess the vast majority of them are equipped with a ticket expensive enough to grant them access to an airport lounge or small children who don’t have to worry about whether or not the person in front of them is going to attempt to recline their seat for the duration of a four-hour flight.

As a result, there aren’t many things I look forward to when flying with one major exception: the airport bar. While a more frugal traveler might fill their allotted quart-sized bag of liquids and gels with as many nips as possible, if you don’t want to deal with the shame that comes with chugging a tiny bottle of SoCo Lime in a bathroom stall, there’s no better place to post up.

Having to fly is as good of an excuse as any to drink, and much like Planet Fitness, airport bars are supposed to be a judgment-free zone— a place where no one will look at you funny for ordering a beer and a shot at 8:30 AM. However, one European airline is trying to take away the oasis travelers who need to decompress a bit after taking a red-eye have come to rely on.

According to The Irish Times, Ryanair— the Irish equivalent of Spirit— wants airports to institute a ban on serving booze before 10 AM after a group of rowdy passengers recently caused a flight to be rerouted. After the incident, spokesperson Robin Kiely said:

“[This]is exactly why we are calling for significant changes to prohibit the sale of alcohol at airports, such as a two-drink limit per passenger and no alcohol sales before 10am. It’s incumbent on the airports to introduce these preventative measures to curb excessive drinking and the problems it creates, rather than allowing passengers to drink to excess before their flights.”

Thankfully, VinePair says the Dublin Airport Authority called their request “highly draconian,” a response that gives me hope in an otherwise hopeless world. I’m glad to know someone is fighting the good fight.