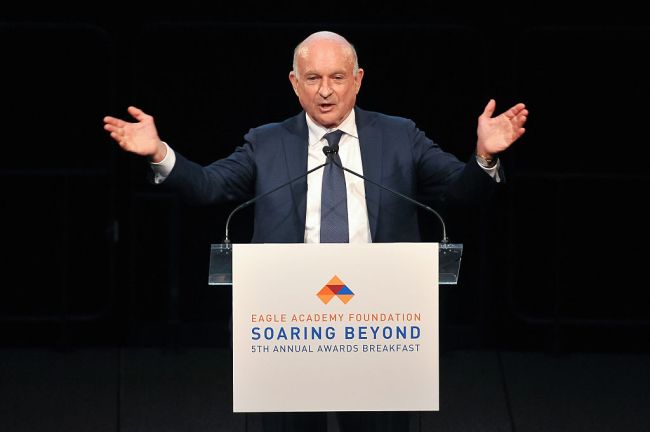 The saga involving Scholastic CEO M. Richard Robinson Jr. and his family could be a storyline straight out of HBO’s “Succession.”

The late owner of Scholastic Corp., which published several iconic children’s books including “Harry Potter” and “Magic Schoolbus,” reportedly cut his immediate family out of his will and left the $1.2 billion publishing empire to his longtime side chick.

“Scholastic's CEO didn’t give control of the $1.2 billion publisher to either of his two sons, or his siblings, or his ex-wife. Instead, control went to Iole Lucchese, Scholastic’s chief strategy officer” https://t.co/EXwCcf2NRQ via @WSJ #publishing #Scholastic

Back in June the 84-year-old Robinson Jr. died suddenly at Martha’s Vineyard and left the company and all of his personal possessions to his longtime lover Iole Lucchese, 54, who has worked at Scholastic for over 30 years.

The longtime head of Scholastic Corp., M. Richard Robinson Jr., died suddenly in June on a walk in Martha’s Vineyard. He left behind a surprising succession plan.He didn’t give control of the $1.2 billion publisher to either of his two sons, or his siblings, or his ex-wife, with whom he had rekindled a friendship during the pandemic. Instead, control went to Iole Lucchese, Scholastic’s chief strategy officer. She also inherited all his personal possessions.

In the 2018 will, a copy of which was reviewed by The Wall Street Journal, Mr. Robinson described Ms. Lucchese, a 30-year company veteran, as “my partner and closest friend.” Ms. Lucchese and Mr. Robinson had been longtime romantic partners, according to interviews with family members and former employees.Ms. Lucchese’s sudden emergence as Scholastic’s heir has set in motion a family succession drama at the century-old company—it is one of the world’s largest publishers of children’s books, from the “Harry Potter” novels to the “Magic School Bus” series—and raised questions about its future as an independent concern.

Family members are apparently not happy about being left out of the will and are hoping Ms. Lucchese will share the wealth with them and transfer over some voting shares of the company.

Some family members are unhappy and are reviewing their legal options, people close to the situation said, with concerns running the gamut from wanting to maintain Scholastic’s independence to rawness about an outsider having control of Mr. Robinson’s personal possessions. One possibility is to reach an agreement with Ms. Lucchese to transfer some voting shares to family members or to ensure they get a greater share of the estate, one person said.

Maurice “Reece” Robinson, Richard Robinson’s youngest son, described his father’s decision to give control of his personal effects to Ms. Lucchese as “unexpected and shocking.”“What I want most is an amicable outcome,” the 25-year-old filmmaker said in an interview. The elder son, John Benham “Ben” Robinson, 34 years old, said in an email that when he grasped his father’s estate plans it “served as salt in an open wound.”

Before he died Robinson named Lucchese as a co-executor of his estate and she has sole discretion over how to distribute Robinson’s personal possessions to his sons.

Robinson’s youngest son Reece seemed to be the most annoyed with situation. “You might think from the will that he didn’t see his sons,” said Reece “That’s not true. For the last two years I saw him multiple times a week.”