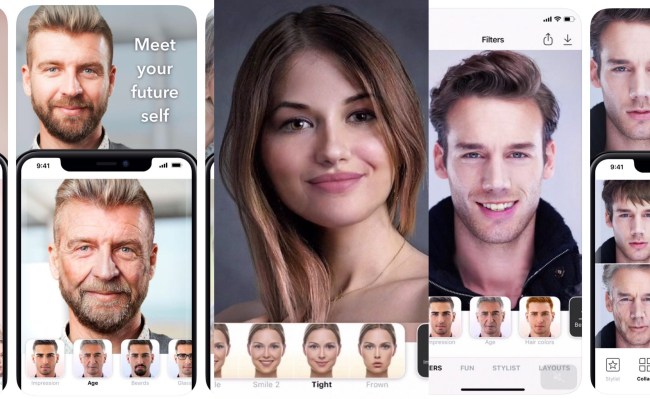 Has anyone or anything on this planet had a more tumultuous week than FaceApp?? This week feels like it’s been 10 days long but back on Monday, the app exploded and rocketed up in the iTunes App Store as one of the most downloaded apps. By Tuesday it had reached the mainstream media, by Wednesday morning a LOT of people had begun to realize that something wasn’t right.

I covered the sketchy part of FaceApp in detail yesterday morning in this article. FaceApp was actually created back in 2017 but only recently exploded in popularity to due to the #FaceAppChallenge being shared by celebrities. The app takes your photos and adds some hyperrealistic filters to make you look older or younger.

The first red flag, and really the only one that matters at this point, is FaceApp was created in St. Petersburg, Russia. Beyond the murky launch from a hostile foreign power, they are completely laughing in the face of your personal privacy.

It reads: ‘You grant FaceApp a perpetual, irrevocable… royalty-free… license to use, adapt, publish, distribute your user content… in all media formats… when you post or otherwise share.’
FaceApp is allowed to use your name, username ‘or any likeness provided’ in any media format without compensation and you won’t have any ability to take it down or complain about it, reports claim.
It also will not compensate you for this material and it will retain the image long after you’ve deleted the app. (via)

A representative from FaceApp released a statement yesterday to try and counter the worldwide backlash of ‘the Russians are stealing our data and probably going to do some really sketchy shit with it’ but that wasn’t enough to stop Senate minority leader Chuck Schumer from calling on the FBI to investigate FaceApp.

This isn’t a small set of data. FaceApp already has 80 MILLION reported active users after it exploded onto the scene.

In a letter posted on Twitter, Mr Schumer called it “deeply troubling” that personal data of US citizens could go to a “hostile foreign power”.
Mr Schumer however has asked that the FBI and the Federal Trade Commission (FTC) to investigate FaceApp.

“I have serious concerns regarding both the protection of the data that is being aggregated as well as whether users are aware of who may have access to it,” his letter reads.
His calls for a probe comes after the Democratic National Committee reportedly warned 2020 presidential candidates and their campaigners not to use the app.

“It’s not clear at this point what the privacy risks are, but what is clear is that the benefits of avoiding the app outweigh the risks,” security officer Bob Lord reportedly told staff. (via BBC)

You can read his full statement here which he shared on Twitter yesterday.

Because millions of Americans have used it

It’s owned by a Russia-based company

And users are required to provide full, irrevocable access to their personal photos & data pic.twitter.com/cejLLwBQcr 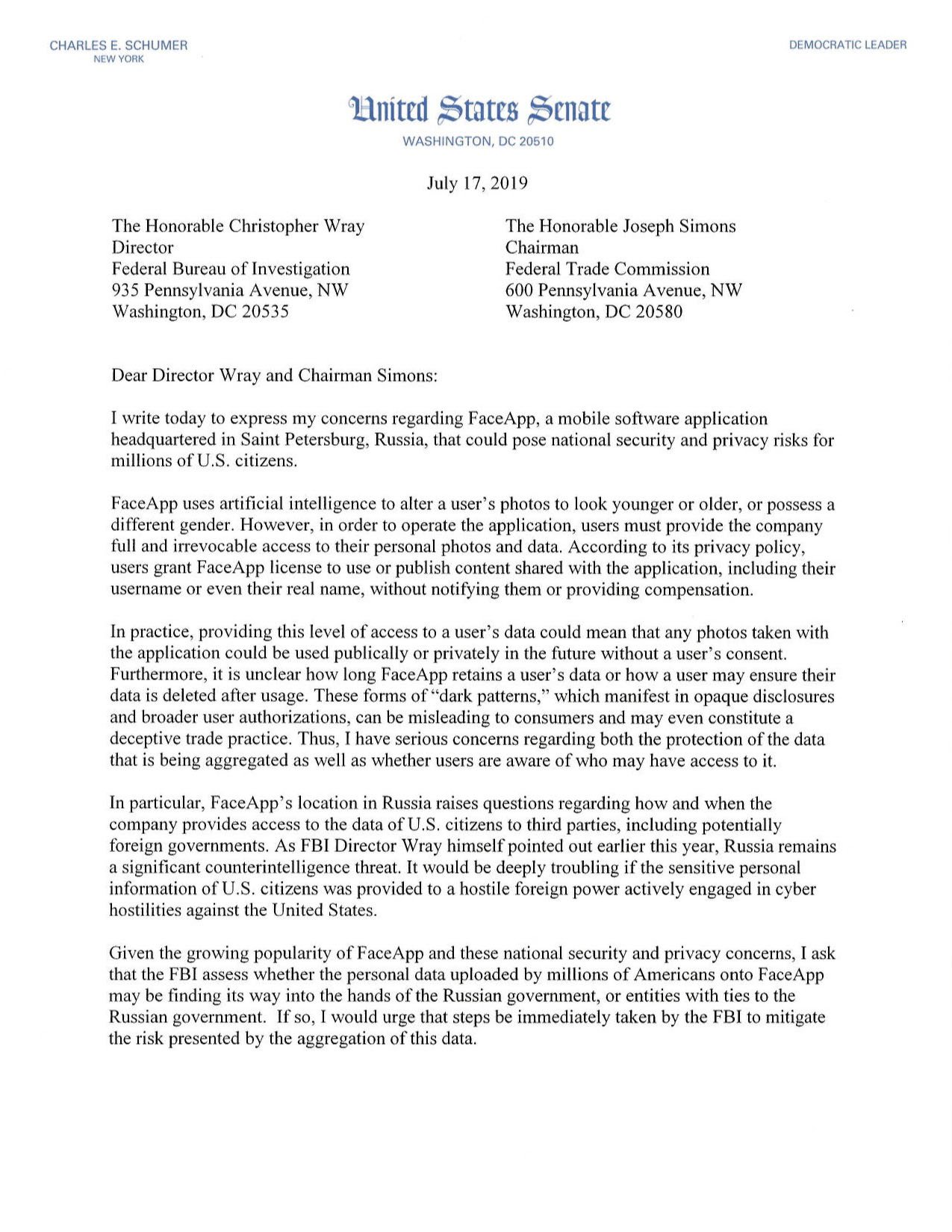 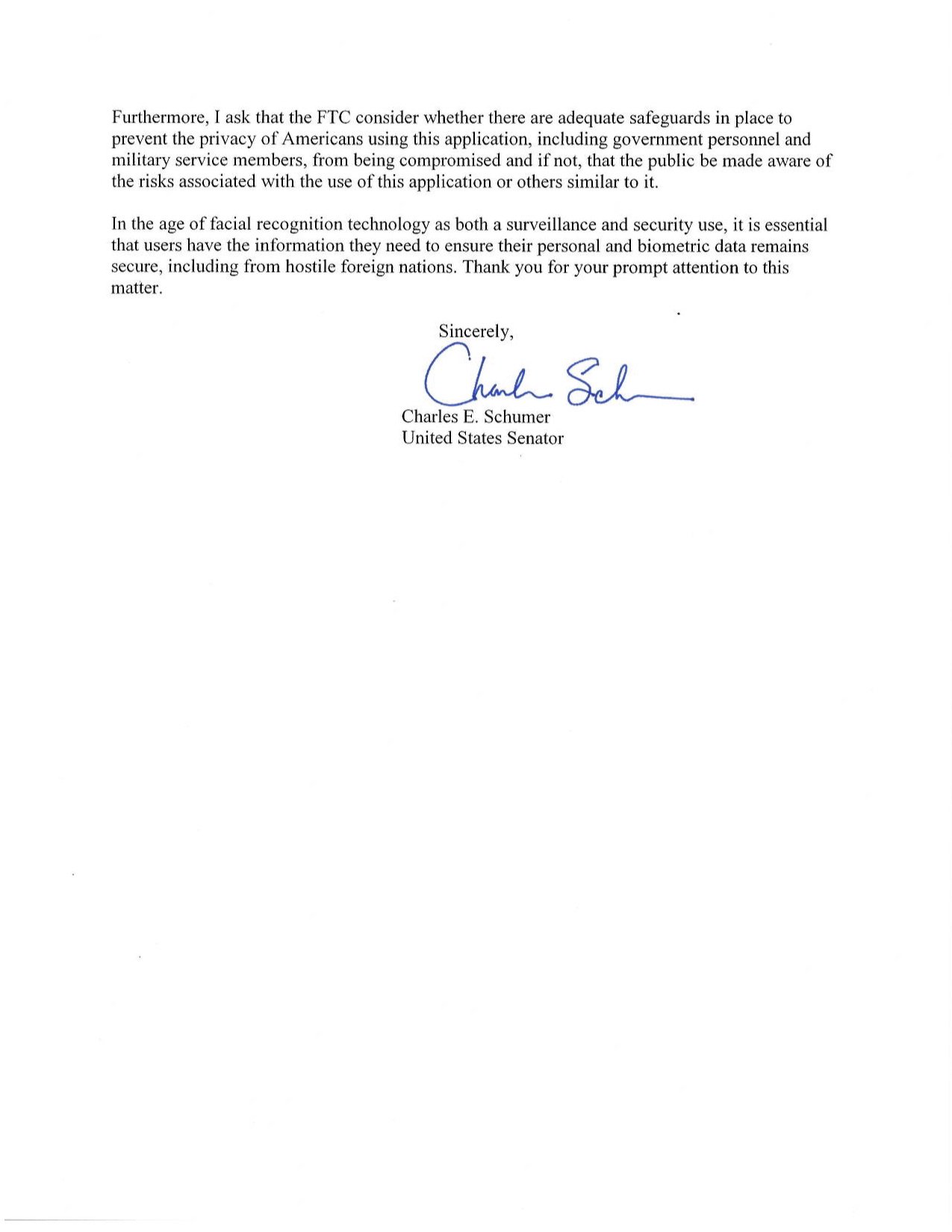 I mentioned this yesterday and I’ll reiterate it again…If you already downloaded FaceApp and tweaked some photos to share with your friends then those pictures were already processed on the FaceApp servers and are in the hands of this Russian company.

This is also nothing new for Big Tech. Google and Facebook are tracking pretty much every movement we make online. They know more about us than we know about ourselves.

But it is pretty disturbing that the data of millions of Americans could be gifted to the hands of a Russian company whose privacy policies are straight-up illegal in Europe and laugh at our personal privacy protections here in America.

For a full rundown of FaceApp’s privacy violations you can check out my article from yesterday, and for more on this story above you can visit the BBC.