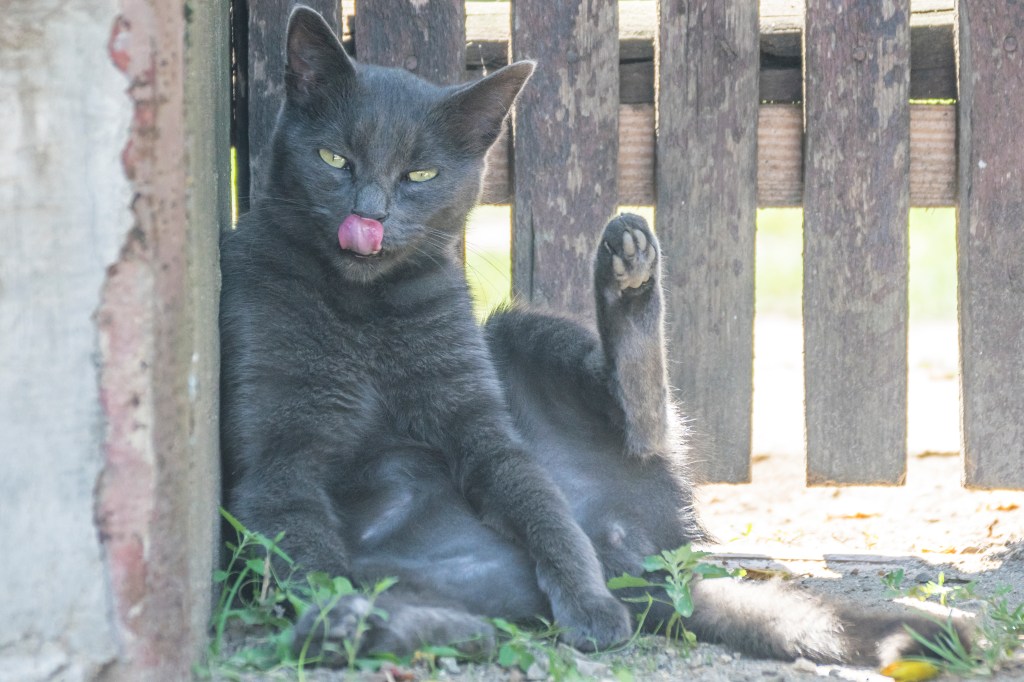 I have always been led to believe that cats rub their butts on everything in a home. They walk around like they own the place and drag their balloon knots across every surface imaginable. This isn’t a claim I’ve ever thought to test but I’m not a genius like this 6th grader who just made this hypothesis the basis of his recent science fair project.

The premise was straight-forward: “Does your cat’s butthole really touch all the surfaces in your home?” But how do you test that? Well, he used non-toxic lipstick applied to long-to-medium-haired and short-haired cats to see if they’d rub that lipstick from their chocolate starfish all over the house and the resulting project is quite possibly the best science fair project I’ve ever heard of in my life.

I used to just free soda into ice cube trays and say it was better than ice. This kid’s out here applying lipstick to cat anuses to solve one of life’s biggest mysteries. This project has gone viral via Facebook with 16,000+ shares and 12,000+ reactions. There are all sorts of pictures as well with the cat in action after the lipstick has been applied. Then the areas the cat may or may not have touched is checked for revealing lipstick:

Here’s the cat sitting on the floor. I would’ve assumed there was contact. But the lipstick tells another story:

Get ready for a good laugh! Kaeden completed his 6th grade science fair project this past week and tackled the challenging task of answering the internet’s most burning question, drum roll please,
“Does your cat’s butthole really touch all the surfaces in your home?” We had a lot of fun with this! As a disclaimer, no cat’s were harmed in the process of this science project. Non-toxic lipstick was applied to their bum-bums, they were then given a series of commands (sit, wait, lie down, and jump up. Side note: Both cats have been trained since kittenhood with a variety of commands, they also know how to high-five, spin around, and speak.), they were compensated with lots of praise, pets, and their favorite treats, and the lipstick was removed with a baby wipe once we collected our data in just under 10 minutes.
His results and general findings:
Long and medium haired cat’s buttholes made NO contact with soft or hard surfaces at all.
Short haired cats made NO contact on hard surfaces. But we did see evidence of a slight smear on the soft bedding surface.
Conclusion, if you have a short haired cat and they may be lying on a pile of laundry, an unmade bed, or other soft uneven surface, then their butthole MAY touch those surfaces!
So there you have it! Chances are favorable that your cat’s butthole has not and will not touch all the things and surfaces in your home!
UPDATE: Thank you all so much for the love!!! I screenshotted many comments and shared them with Kaeden this morning. We are both so very touched! And y’all’s comments are lit! They gave me so many great laughs last night reading through them! And yes, Kaeden most definitely got an A++++++, we homeschool so I made sure he got his A+! Funny thing is I have a Ph.D. in animal behavior, with a concentration in feline behavior that I’ve never used , I feel like for the first time in 15 years I actually put my degree to use, even though I was only supervising his science project! But that we actually did contribute useful information to the cat world! I am so tickled! Thank y’all so very much!!!

Now, the only responsible thing to do is go forth into the world and share this article with every single cat person you know so they can know the truth about whether or not cat’s buttholes touch every surface in the house and leave residue behind.