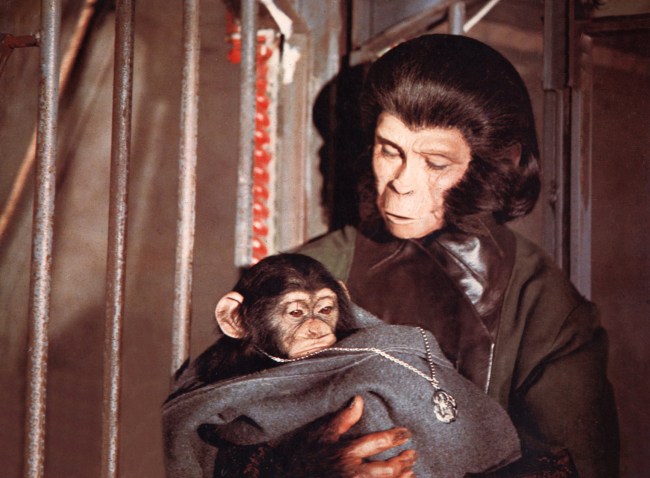 If I’ve learned anything from Science Fiction films this year it’s that movies are complete trash at predicting behavior. After a million films like Contagion and Outbreak I thought we had a pretty good handle on how people would react in the face of a pandemic but those movies never accounted for half of the population just saying ‘nah fam, I’m good.’

So while I once thought I had a pretty good idea of how a Planet of the Apes experiment would result I’ll save my predictions and instead report the facts: scientists doubled the size of monkey brains by splicing human and monkey genes together and the monkeys started exhibiting more behaviors characteristic of human beings and not monkeys. This is according to a recent release on the experiment from German and Japanese researchers.

There’s this human-specific gene named ‘ARHGAP11B’ which arose around 5 million years ago and led to present-day humans. This human-specific gene was believed to be key to the expansion of the human neocortex which is responsible for brain function like language, perception, motor function, and more. So what’d they do? They figured out a way to put that gene in monkeys to see what would happen to their brands, to test if it would cause a rapid expansion of the neocortex…and it did.

Here’s some dense scientific language from the study with some analysis below via the Post:

They generated transgenic common marmosets, a New World monkey, that expressed the human-specific gene ARHGAP11B, which they normally do not have, in the developing neocortex. Japan has similarly high ethical standards and regulations regarding animal research and animal welfare as Germany does. The brains of 101-day-old common marmoset fetuses (50 days before the normal birth date) were obtained in Japan and exported to the MPI-CBG in Dresden for detailed analysis. Michael Heide explains: “We found indeed that the neocortex of the common marmoset brain was enlarged and the brain surface folded. Its cortical plate was also thicker than normal. Furthermore, we could see increased numbers of basal radial glia progenitors in the outer subventricular zone and increased numbers of upper-layer neurons, the neuron type that increases in primate evolution.” The researchers had now functional evidence that ARHGAP11B causes an expansion of the primate neocortex. (via)

If you’re wondering what happened to these fetuses after their brands went super-human? Well, they gone. Nobody knew what would happen next and due to ‘unforeseeable circumstances’ they opted to abort the marmoset fetuses according to the Post:

The neocortex is the newest part of the brain to evolve — one sign that ARHGAP11B may have caused brain growth during human evolution, the researchers said.

Ultimately, scientists opted to abort the monkey fetuses due to “unforeseeable consequences,” according to the release.

The study — conducted by the Planck Institute of Molecular Cell Biology and Genetics in Germany and the Central Institute for Experimental Animals in Japan — is reminiscent of the 2011 flick “Rise of the Planet of the Apes,” in which a race of genetically modified primates turn against humans and take over the Earth. (via NYP)

Now I’ll let my imagination go for a little while and point out that these scientists have now established that it’s possible to splice the human gene into monkeys and now all it takes to start a Human vs. Monkey war is some rich and bored billionaire to come along and hire his own team of scientists to replicate this experiment.

Seriously, what’s stopping someone with unlimited resources and funds from doing this on their own behind closed doors? Nothing. Sure, there are regulations against it but has that stopped anyone from breaking the law before? Nah.

I give it less than 15 years until we find ourselves taking up arms against a race of superhuman monkeys.

This is completely unrelated but a few years back we found an ancient family video from when my grandma was a little kid. She used to tell me this story about how her parents had pet chimpanzees when she was a little girl and how since she was the youngest of 5 children her parents would occasionally make her eat dinner with the chimpanzees who would steal her dresses and wear them to dinner. I always thought these were the stories of an old person making stuff up and then we found that family video and alas, there she was as a little girle eating at the table with pet chimpanzees. What a world.