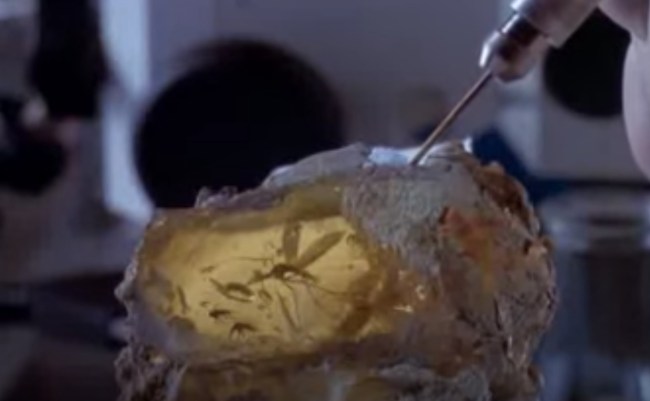 I hope you’re all ready for a future with dinos roaming around and extinct wolves taking over the Heartland because from where I’m sitting that’s the direction things are headed. Remember that opening scene from Jurassic Park? It’s the one where the lawyer goes to a remote mine in the jungle to meet with Hammond (who’s not there) but he catches a glimpse of that mosquito inside of amber, a mosquito who had sucked the blood of dinosaurs.

Of course, you remember that scene. It’s one of the most memorable opening sequences in film history because it sets the precedent on how pretty much every person alive believes it’s possible to bring dinosaurs back from extinction. Just in case you need a reminder, here you go:

Well, scientists have successfully extracted DNA material from insects inside of resin samples. The findings were published in the scientific journal PLOS ONE. Unlike in Jurassic Park, these samples weren’t from the land before time but were just several years old, according to Phys.org:

For the first time, Senckenberg scientist Mónica Solórzano-Kraemer, together with lead authors David Peris and Kathrin Janssen of the University of Bonn and additional colleagues from Spain and Norway, successfully extracted genetic material from insects that were embedded in six- and two-year-old resin samples. DNA—in particular, DNA from extinct animals—is an important tool in the identification of species. In the future, the researchers plan to use their new methods on older resin inclusions, as well. The study was published today in the scientific journal PLOS ONE. (via Physorg)

This obviously invites immediate comparisons to Jurassic Park but these scientists in particular say they have no intentions of extracting Dino DNA. I call shenanigans on that. Someone will come along with an unlimited budget and demand dinos. This is the natural progression of events here.

“However, we have no intention of raising dinosaurs,” says Dr. Mónica Solórzano-Kraemer of the Senckenberg Research Institute and Natural History Museum. “Rather, our current study is a structured attempt to determine how long the DNA of insects enclosed in resinous materials can be preserved.”

To this end, lead author Dr. David Peris of the University of Bonn, the amber researcher from Frankfurt, and researchers from the Universities of Barcelona and Bergen and the Geominero Museum (IGME) in Valencia examined the genetic material of so-called ambrosia beetles that were trapped in the resin of amber trees (Hymenaea) in Madagascar. “Our study fundamentally aimed to clarify whether the DNA of insects embedded in resin continues to be preserved. Using the polymerase chain reaction (PCR) method, we were able to document that this is, indeed, the case in the six- and two-year-old resin samples we examined,” explains Solórzano-Kraemer. (via Physorg)

The article on Phys.org goes on to discuss how experiments like this in the past have failed because environmental changes over millions of years have either destroyed the DNA or caused significant changes. But they’ve now proven the process works so it’s just a matter of finding the right DNA sample which might be possible as the earth warms every year and perfectly preserved extinct species are uncovered in Russia’s tundra.

They don’t know how long DNA can survive inside of resin. That’s the next step in this ongoing pursuit to definitely not bring back dinosaurs. What they’ve discovered to this point it DNA stays intact inside of resin for much longer than anyone thought was possible. As for dino DNA inside of ‘several million year old’ resin, the scientist describes it as ‘rather unlikely’ that extracting functional DNA would be possible but I’m not hearing that as a hard no.