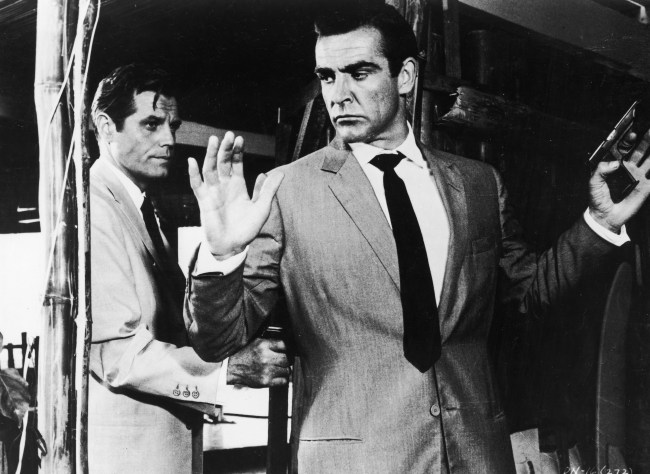 Close your eyes and think of Sean Connery’s James Bond posing and he’s probably standing in a tuxedo with his iconic Walther PPK pistol ready for use. Sean Connery was the first actor to play James Bond when he appeared on screen as 007 in 1962’s Dr. No, the film that brought Ian Fleming’s fictional spy to life and launched one of the most successful film franchises in history.

James Bond‘s car, gun, and watch are all parts of the iconography. They’re woven into the fabric of what makes the character complete. Bond’s best-known gun is the Walther PPK but his first pistol was the Walther PP and there were two used in the filming of Dr. No, one of which is about to hit the auction block and could fetch up to $200,000 according to the auction house.

Personally, I think that’s a very safe estimate Julien’s Auctions and I believe this unique piece of film history will sell for a lot more but we’ll know the answer to that next month when over 600 pieces to debut in the “Icons & Idols: Hollywood” collection at Julien’s Auctions on Tuesday, December 3rd.

The deactivated Walther PP pistol is one of two used in the filming of Dr. No and that silhouette of Sean Connery as James Bond holding his iconic pistol is one of the most unforgettable images throughout the history of Hollywood. Here’s the report from CNN:

Though the films referred to Bond’s gun as the PPK, the actual prop used in “Dr. No,” the very first Bond film starring the late Sean Connery, was the Walther PP, which had a slightly longer build.

The deactivated Walther PP pistol, one of the two original props used by Connery, will go under the hammer at the upcoming “Icons & Idols Trilogy: Hollywood” sale, hosted by Julien’s Auctions, on December 3 in Beverly Hills and online. The handgun is expected to fetch up to $200,000, according to the auction house.

“The silhouette of 007 holding this gun would go on to become the James Bond franchise’s most iconic image and one of the most recognizable pop culture references of all time,” he said in the statement. “We are honored to include his Walther PP Pistol as our auction’s headlining item along with hundreds of other historical memorabilia from Hollywood’s greatest classic films and television series.”

The prop had been held by UK-based prop house Bapty, the original film armorer, until it was sold at an archive auction in 2006. The buyer kept it in their collection until now, according to Julien’s Auctions. (via CNN)

Sean Connery's original gun from the first James Bond film is up for sale https://t.co/EP1dL6nm5M pic.twitter.com/RIxz3udBGT

I’ve struggled at times to wonder why someone would be willing to spend over $3 million on a Honus Wagner baseball card, or any trading card for that matter, but $200,000 for the very first James Bond pistol makes perfect sense in my mind.

Think about how many millions of millennials (and everyone) used Bond’s pistol in Goldeneye on the N64. My grandfather knew this image of Bond even though I never knew my grandfather. It’s crazy to think that there might be some people on the planet who haven’t seen an iconic silhouette of James Bond holding his pistol throughout the years.

Other items in the auction’s collection include a black leather jacket worn by Arnold Schwarzenegger in The Terminator ($50,000) and the hoverboard from Back to the Future Part II which are both impressively awesome pieces of Hollywood history. If you’re wealthy and looking to spend, make sure to check out Julien’s Auctions for the auction beginning on December 4th. You can also sign up to receive updates for when it goes live.