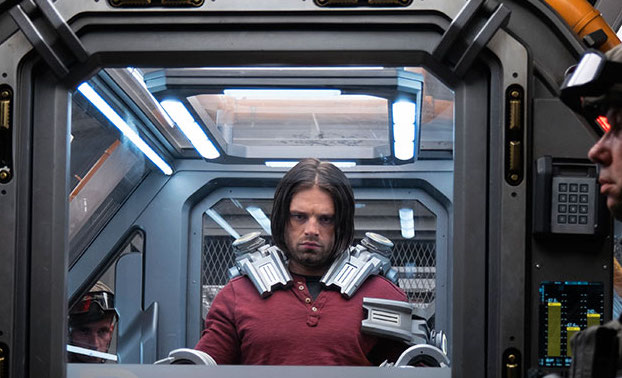 One of the most pleasant surprises of The Falcon and the Winter Soldier — other than the genuinely movie-level quality CGI (which isn’t really a surprise, more so a highlight) — has been the performance of Sebastian Stan, who’s been starring as Bucky Barnes, a.k.a. Captain America’s BFF a.k.a. The Winter Soldier, for a decade now. And hand up, I did not know the guy was capable of the performance he’s putting forth in The Falcon and the Winter Soldier. Yes, I’m aware that Stan has been doing solid work as Bucky, and in other roles, for some time now, but I still did not know he had the dramatic, but perhaps more importantly, the comedic chops to lead a series. Bucky’s dry humor is one of The Falcon and the Winter Soldier‘s most enjoyable aspects and that largely has to do with Stan’s timing, tone, and delivery. As a result, both he and his character are getting some much-deserved time in the MCU spotlight.

All that said, while playing a Marvel superhero for a decade is a dream job for most actors (especially considering the consistent paycheck that comes with it), it’s not always sunshine and rainbows, as Stan says that fans are constantly coming up to him trying to “activate” the Winter Soldier by repeating the code sequence first introduced in Captain America: Civil War.

“It happens at coffee shops. It happens a lot. And it’s always very funny. It’s an honorable thing I guess. You’re very taken with it all the time. You do have to sometimes look at people in the face and say, ‘No, I will not become the Winter Soldier when you say that. You can keep saying it, and maybe you should say it, maybe that’s a moment we both need to have together, now, here. But nothing crazy will happen.’”

Please, people, if you see Sebastian Stan out in public, stop trying to turn him into the Winter Soldier, you monsters. Besides, that usually doesn’t end up well for people.

The newest episodes of ‘The Falcon and the Winter Soldier’ will hit Disney+ on Friday, April 9. We’re recapping and reviewing that series and all things Marvel Cinematic Universe over on the Post-Credit Podcast, so make sure to subscribe and check that out.