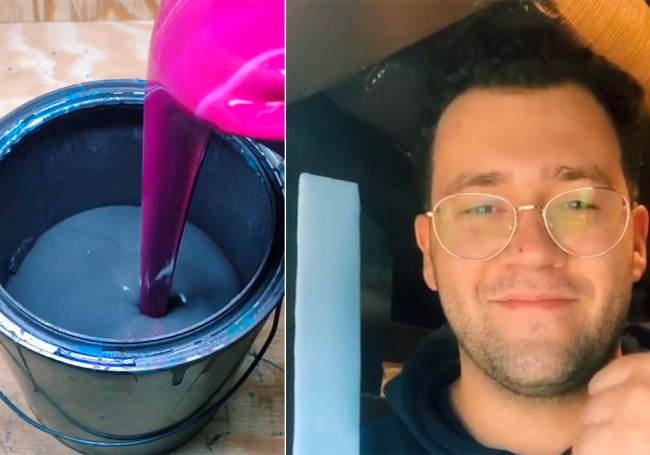 Unlike most college-aged kids, Piloseno loved his job. He loved it so much, he started a TikTok account just to show off all the amazing colors that can be made by mixing Sherwin-Williams paint.

People loved Piloseno’s work so much, he quickly grew a massive following. At this moment, his @tonesterpaints account has 1.4M followers and 24M likes. So much for the old adage that “watching paint dry” is a boring endeavor.

Piloseno quickly realized he was onto something and told his employers, for months, that the viral account is an example of what Sherwin-Williams could do on social media.

An employee for over three years, Piloseno pitched the company the idea to let him marketing the brand to a younger audience and even created a pitch deck to show management.

For all his hard work, got something he wasn’t expecting. He got fired.

According to BuzzFeed News, corporate investigated the account, realized Piloseno was making these videos during working hours, and showed him the door

According to termination papers Piloseno provided to BuzzFeed News, the official offense the company handed down to him was “gross misconduct,” which included the offenses of “wasting properties [and] facilities,” and “seriously embarrass[ing] the Company or its products.”

Shortly after this story was published, the company spokesperson told BuzzFeed News that it was due to a “customer complaint” about Piloseno’s TikToks that they terminated his employment.

Piloseno told BuzzFeed News he did admit to filming TikToks while he was already mixing paints for customers when he first started posting to his channel in December 2019. But, as his page grew, he committed to purchasing cans of paint with his employee discount.

According to Piloseno, corporate ignored his idea for months, and eventually reached out to say they weren’t any promotions going on so there was no need to see the presentation.

A few months later, the college student was contacted by Sherwin-Williams. The company had received numerous phone calls about “mixing blueberries into their paint because of this viral TikTok.”

“They first accused me of stealing — I told them I purchased all my paint,” Piloseno told BuzzFeed. “They made me answer a bunch of questions like when I was doing this, where, if there was anyone in the store while I was doing [filming]. There was never anyone with me while I doing it.”

A Sherwin-Williams spokesperson told BuzzFeed News that “a customer’s concerns” is what led to an investigation and ultimately led to their decision to fire Piloseno.

“I’m working on making a logo; I just bought a domain name to make my own website,” he told BuzzFeed. “I’m hoping to sell my own merchandise and my own paint colors.”

This story can teach so many people valuable lessons. One, many companies are run by idiots with zero understanding of the free marketing potential available on social platforms.

Second, if you’re the head of a company, don’t be an idiot. There’s free marketing potential available on social platforms.

Piloseno is trying to turn the account into a full-time job.