This Guy Fired A .50-Caliber Bullet From A Shotgun To See What Would Happen Aaaaaand We’ve Got A Fire On Our Hands 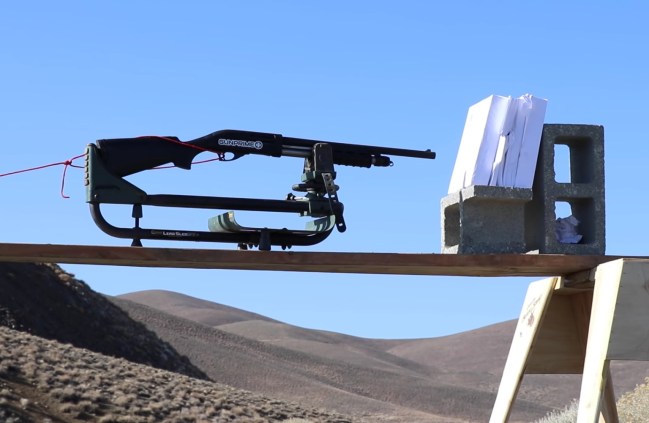 I can earnestly say that I’ve never wondered what would happen if you fired a .50 BMG from a shotgun because it never in a million years would’ve crossed my mind to experiment with something like this because if I tried it then I’d almost certainly injure myself.

Alas, Edwin Sarkissian is a professional in this realm. Experimenting with high-powered rifles and explosives is his specialty. And this latest clip is pretty spectacular.

The basis of the experiment is to see if it’s possible to load a .50 BMG inside of a pump-action shotgun and fire it. For anyone out there who needs a quick refresher, the .50 BMG cartridge is a .50 caliber cartridge for the Browning Machine Gun that was used as far back as World War II. There are all sorts of variants of the .50 BMG including armor-piercing and tracer, and it’s also used in long-range sniper rifles. Notice how nowhere in that description is a shotgun mentioned?

Well, Edwin loads up the .50 BMG into a pump-action shotgun and fires it to see what happens and he films it in slow-mo HD so we can really see the destruction as it unfolds, check it out:

So what he found is that you can fire a .50 BMG from a pump-action shotgun and do some serious damage but it doesn’t really begin to tap into the power of the cartridge or the shotgun when they’re used as they were designed to be.

If you are looking for more videos like the one above, might I suggest this other clip from the same YouTube channel where Edwin tests if a $35,000 bomb suit can withstand the blast of an M67 grenade? Spoiler alert, the person inside of the suit would’ve never made it:

You can always hop into the BroBible archives and check out previous articles similar to this one if you’re feeling like today’s a good day to see how deep the rabbit hole goes.