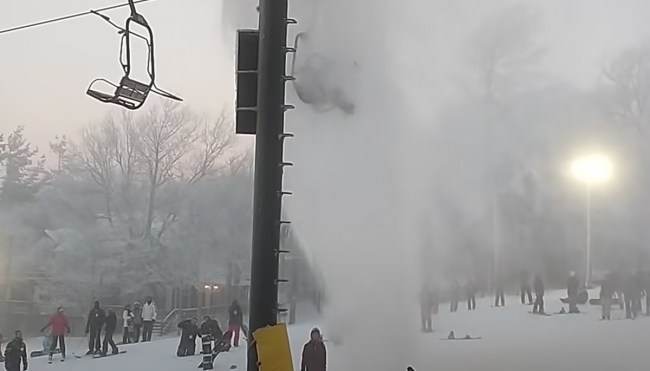 Skiing can be a pretty dangerous outdoor activity if you don’t know what you’re doing, but even the most seasoned slope veterans can fall victim to one potentially dangerous aspect of the pastime: the lift.

I remember being pretty terrified the first time I ever hopped on a ski lift as a kid, as I was pretty baffled that the primary mode of transportation to get to the top of the mountain was a rickety chair suspended from a wire with a single safety bar standing between you and the ground below.

You usually have no one to blame but yourself if you manage to fall from a chairlift, but the same can’t be said for getting stuck on one—a concept that was scary enough to spawn a movie based on that very idea.

Last Friday, some particularly unlucky individuals at North Carolina’s Beech Mountain Resort found themselves thrust into a similarly horrifying scenario after a pipe located underneath a lift burst and subsequently blasted multiple riders who found themselves stuck directly above it with freezing water on a day where temperatures peaked at 19°F.

According to WSOC, the incident was sparked by a skier who ran into a hydrant. That person wasn’t injured, but the same can’t be said for multiple people who were taken to the hospital, including one woman who was knocked off the lift by the geyser and another who fractured her arm after deciding to jump 25 feet to the ground to avoid being subjected to the water.