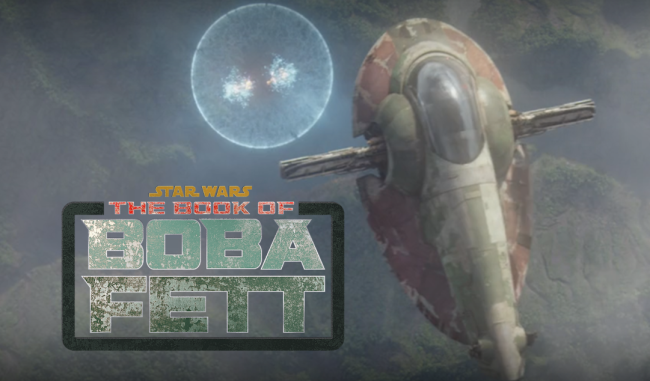 To be perfectly honest, I haven’t been loving The Book of Boba Fett. Heading into the debut of the series, I was arguing that Boba Fett’s story would’ve been better served as a B-plot in season three of The Mandalorian. For example, the first two seasons of The Mandalorian have consisted of eight episodes, so I suggested beefing season three up to ten or eleven and giving the extra hours to Boba.

Instead, a spinoff miniseries has been rolled out and the first four episodes — there are seven in total — feel hollow and slow and nowhere near as important as The Mandalorian did, which I consider as the best Star Wars content (alongside Rogue One) that’s been produced in my nearly 30-year lifetime.

Nevertheless, the series progresses, and with it has come a been of contentiousness in the Star Wars community over the decision to change the name of Boba Fett’s ship from Slave 1 to Firespray Gunship. That’s an eye-rolling sentence in and of itself, I know. Essentially, the Firespray is the model of the ship, similar to the X-Wing.

Thus far, reactions to the change have been all over the place, as is expected:

Doesn't make sense considering that Slave 1 was the name of Boba Fett's specific ship while the ship type is a Firespray-31-class patrol and attack craft.

Again, no one ever had a problem with the ship being called Slave 1. It only became a problem when Disney made it one. https://t.co/uv8KKTrdqt

This’ll probably be an unpopular opinion, but Firespray is a way cooler name for Boba Fett’s ship than Slave 1 #TheBookOfBobaFett pic.twitter.com/v0xOk8tXjA

Black people watching #BobaFett episode reviewers constantly and defiantly referring to the Firespray as “Slave 1“ because they “don’t see what the big deal is“ pic.twitter.com/1IggL47EIx

Just so you all know; I’ve been a Star Wars fan for 44 years & I don’t care if they retire the Slave 1 name. It’s just not that big of a deal! It doesn’t depict who Boba Fett is or who Jango was, so if it never gets used again, it doesn’t matter a pinch of shit! 🤷‍♂️
MTFBWY

oh lord not the slave 1 argument coming back… pic.twitter.com/kRV2QJZ2iQ

Regardless of where you land on this Slave 1 vs. Firespray debate, I think we can all agree that if you understand this sentence, you're a loser.

That's DISGRACEFUL what a boring generic name. It will always be Slave 1 to me #BookofBobaFett #StarWars https://t.co/B4ATPz5fG7

RELATED: ‘The Mandalorian’ Director Is Teasing The Return Of The Jedi In Season 3

The Book of Boba Fett is currently streaming on Disney+. At the time of this writing, there are three episodes left in the seven-episode series, which is only supposed to be a one-off. Further Star Wars series — such as Obi-Wan Kenobi, Andor, and season three of The Mandalorian, will also hit the streaming service this year.