27-Year-Old Man Plays ‘Are You Smarter Than A 5th Grader?’ And The Results Were Extremely Alarming 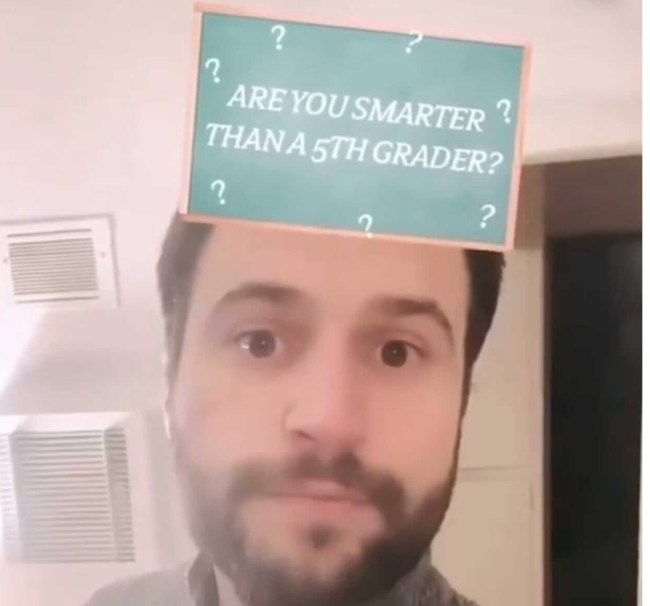 In case you haven’t seen it, a new Instagram feature has gone viral. The “Are You Smarter Than A 5th Grader?” filter gives you a rapid quiz that gives you five seconds to answer a question that is found on 5th grade level quizzes and tests. With absolutely nothing better to do, I decided to step up to the plate and give it a go, the results were nothing short of horrifying.

First things first, I would like to speak to the 5th grader that knows what European country Budapest is in. I would also like to then double down on that and ask that same 5th grader what month is named for the Roman god of war. While I definitely don’t think these questions are actually asked to 5th graders, I do have to admit that the results of this were flat out embarrassing.

The fact that I didn’t know how many letters were in the English alphabet makes me extremely concerned. I want to throw the blame elsewhere but don’t really know who it is that I should be blaming for me not knowing this. I’m also left to wonder how I even got into college or even landed a job here at BroBible. Who knows, maybe my bosses will see this video and decide that they can’t have a guy in their company that doesn’t know the answer to, ‘what is the part of the eye that controls how much light enters?’

Just an awful display of intelligence here today and a moment I definitely would like to forget, which is why it probably wasn’t the best idea for me to blog it.