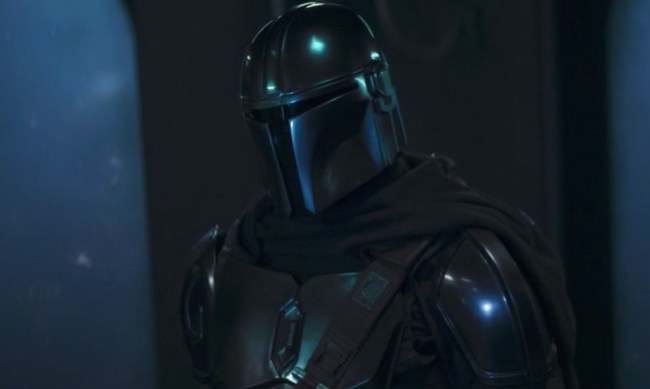 Worried that you blinked and you missed it? Don’t worry, because it wasn’t a visual Easter Egg about Snoke buried in latest episode of The Mandalorian, “Chapter 12: The Siege”, it was musical.

During the siege of the Imperial base in the second half of the episode, Mando, Cara Dune, and Greef Karga stumble upon tanks filled with humanoid-shaped figures in them, discovering that they’re actually not blowing up a military base, but a scientific lab. As they do so, the theme music for Supreme Leader Snoke — the Andy Serkis-voiced villain from the sequel trilogy — can be heard playing in the background.

As we learned — like it or not — in The Rise of Skywalker, Snoke was simply a creation of Palpatine’s that he used to control the First Order and lure Kylo to the dark side as he was building his army out in the Unknown Regions. Who the hell knows. The nonsensical nature of Rise of Skywalker’s plot isn’t the point here. The point is that the musical cue referencing Snoke is also a reference to Palpatine, which means that whatever Moff Gideon is doing could be tied to him. Hopefully not, though.

This Friday’s episode is shaping up to be another banger, as Chapter 13 is reportedly titled “The Jedi”, which suggests fans will be getting their first look at Rosario Dawson’s live-action Ahsoka Tano.