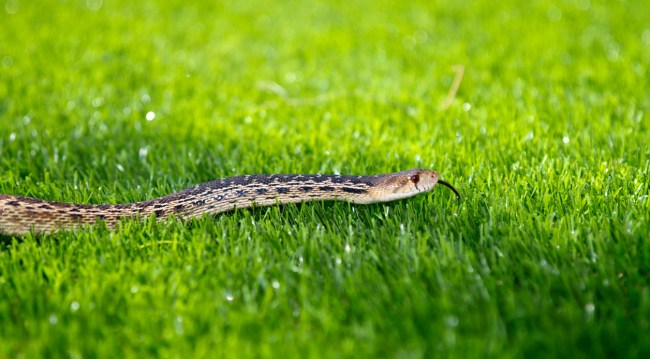 If there is a lesson that 2020 has taught us, it’s that we’re no longer safe outside. We are now living in a world where it’s distinctly possible for healthy, bench-pressing Americans to be obliterated by a gnarly bug. And even if we are lucky enough to escape this vile sickness, there’s still wicked upheaval in the streets. Oh yeah, and the national economy is wrecked to the point of making “what the hell are we all going to do for money,” the unofficial slogan of the post Trumpocalyptic generation. There’s also murder hornets a-coming, the scourge of a savage heat wave and a craft beer shortage. I mean, come on, man! What gives? But if the threat of certain death, financial ruins and being reduced to drinking light beer wasn’t enough to keep us planted indoors, we’ve just been reminded that there are flying snakes that could possibly take us out from the heavens. All of a sudden, it feels like we’re in Roland Emmerich’s film adaptation of the Book of Revelation, and we don’t have a strong enough role to survive until the end.

Researchers at Virginia Tech felt the need to reiterate this week that some species of snakes are capable of flight. Yikes! But it wasn’t that scientists were actually trying to get us all paranoid about these slithering spawns of Satan coming down on our heads and killing us of a heart attack. Their paper, which was published in Nature Physics, set out to explore exactly how a particular breed of serpent (Chrysopelea, aka Paradise Tree Snake) are capable of launching themselves from tall branches and gaining air unlike any we’ve seen since Jordan was with the Bulls.

But just how is this black-magic-snake-voodoo possible without wings or a cape?

Lead researcher Jake Socha, a professor of biomedical engineering and mechanics, explained that while the term “flying snakes” is a bit of a misnomer, it takes a high level of coordination and confidence for them to go airborne. Without getting overly scientific about it, this tree snake is capable of a brand of acrobatic aeronautics that allows it to defy gravity to some degree. And when they leap, let’s hope you are not standing in the way. These wily tubes of evil can fly about 70-feet with a single push. The good news is they cannot gain altitude, nor can they achieve this freakishly frightening act starting from the ground. They need a high jumping-off point before hurling themselves through the air in a manner that proves that the Devil is all too real.

Still, these cold-blooded menaces are not really flying at all – they are undulating, the same as they do on land or in water. The snake moves its ribs and muscles, changing the airflow around them and creating a parachute-like phenomenon that takes them through empty space with speed and ease. If you’ve ever seen a squirrel leap from a tall tree and land on its feet without killing itself, it’s using a similar concept. Only flying snakes are much better at it than other animals.

“All snakes undulate when they move. And so on the ground, on a tree, in the water, they are creating these side-to-side waves,” Professor Socha told NPR. “It’s not crazy to think that when the snake jumps into the air, the snake goes, ‘Hey, I’m a snake. I undulate. That’s what I should be doing.’”

The upside is there are no flying snakes in the U.S. Not yet. Just give this year time, though, and I’d be willing to bet they are not far off. For now, these creatures reside in Southeast Asia, the southernmost parts of China and India. Don’t worry too much if one happens to land on you. Although they are venomous, the bite is not powerful enough to kill humans. Nevertheless, the sheer shock of a flying, grass grinding representative of Hell is sure to scare the holy living crap out of a person and send them into the arms of St. Peter with PTSD – Post Traumatic Snake Disorder.

I know it would me!