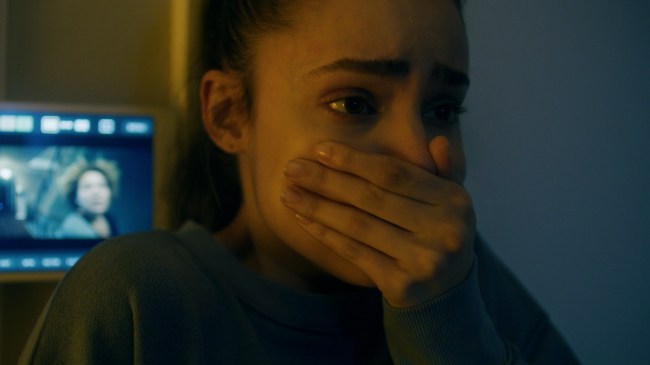 Generally, movies are a vehicle to transport you to a world or an experience that is completely different than your life. However, big-time Hollywood director thought it would be a super idea to take the worst aspects of 2020 and amplify them and present to the audience a worst-case scenario of the coronavirus ravaging the world for the next four years. The trailer for the COVID-19 pandemic-inspired Songbird debuted on Thursday, and not everyone was thrilled with it.

In the apocalyptic film, the year is 2024, and the coronavirus has laid waste to humans, and the annual death toll from COVID-19 reached a terrifying 8.4 million. Authoritarian governments have taken restrictive lockdowns to a scary new level, basically instituting permanent martial law. Anyone who has unusual symptoms or tests positive gets yanked out of their home by the military wearing hazmat suits and brought to a quarantine camp.

The trailer uses Bob Marley’s ultra-happy Three Little Birds, which is somehow transformed into a creepy soundtrack for the dystopian flick.

“It’s a dystopian, scary world, but it’s a romantic movie about two people who want to be together, but they can’t,” director Adam Mason told Entertainment Weekly. “It’s ‘Romeo and Juliet,’ but they’re separated by her front door and by the virus.”

Four years into quarantine the virus has changed and so have we… In the terrifying thriller SONGBIRD, the COVID-23 virus has mutated and the world is in its fourth year of lockdown.

Infected Americans are ripped from their homes and forced into quarantine camps known as Q-Zones, from which there is no escape, as a few brave souls fight back against the forces of oppression. Amid this dystopian landscape, a fearless courier, Nico (KJ Apa), who’s immune to the deadly pathogen, finds hope and love with Sara (Sofia Carson), though her lockdown prohibits them from physical contact. When Sara is believed to have become infected, Nico races desperately across the barren streets of Los Angeles in search of the only thing that can save her from imprisonment … or worse.

The first feature film to be made during COVID-19 in Los Angeles, and about the pandemic itself, SONGBIRD also stars Bradley Whitford and Demi Moore as a wealthy couple who may hold the key to Nico’s mission; Alexandra Daddario as a singer enmeshed in a messy and forbidden affair; Paul Walter Hauser as a disabled veteran whose best friend – a drone named Max – is his eyes and ears to a world that has left him behind; Craig Robinson as Nico’s boss; and Peter Stormare as the corrupt head of the city’s “sanitation” department, which seizes those infected and transports them to the Q-Zone.

However, after the Songbird trailer was released, the internet exploded with fury about the controversial film. Twitter reactions fumed with disgust over the pandemic movie, claiming it is profiting off of COVID-19 deaths.

“This movie is so in extremely poor taste & I can’t even believe that this movie is coming out when cases are skyrocketing, hospitalizations are going back up & after so many people lost their lives to this virus,” a person stated. “This is so very disgusting, very disrespectful & very insensitive!!”

“I think that this is very insensitive & harmful to release a pandemic horror movie while we are still in the middle of this pandemic,” one Twitter user wrote. “Also I don’t see any masks, barely any social distancing & this movie is just straight up so disrespectful to all the people who lost their lives!”

Cuz this is exactly what we need right now pic.twitter.com/Ox49DGAkpn

People are dying and you're capitalizing off the current situation with a movie. pic.twitter.com/65KXsczJQ1

Imagine dropping a movie about 9/11 in early 2002 when the memories of your lost loved ones and the general tragedies were still ongoing in the public sphere.
That’s exactly what Songbird is doing. Few things have made me this angry and disgusted.
F**** Michael Bay and his greed.

That Songbird movie is trash and shame on everyone who thought it was an idea worth pursuing.