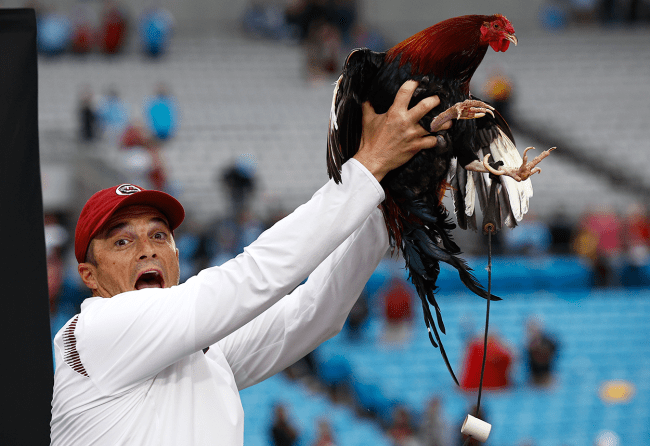 As Nick Saban and Jimbo Fisher yelled at one another over Name, Image and Likeness this week, it was made very clear how college football in the south is just different. Meanwhile, South Carolina head coach Shane Beamer was getting an SEC experience of his own at an alumni event.

Awesome crowd in Rock Hill tonight for our ⁦@TheGamecockClub⁩ event !! Thank you

So many great ⁦@GamecockFB⁩ players have come from York County

On Wednesday evening, the 45-year-old, second-year coach spoke with boosters at a Gamecock Club even in Rock Hill. Beamer spent most of the evening going through the typical musings of his public appearance tours, spoke about NIL, and talked about how he plans to recruit the hotbed of talent located just south of Charlotte.

Shane Beamer said he was told before the event tonight it’d been a while since a South Carolina head coach came to an event in Rock Hill.

“I don’t know what the hell the previous coaches were doing. That will never happen again here at Carolina, I can assure you that.”

Amidst all of the conversation and Q&As, Beamer shared a story from earlier in the night. It is often said, even in the conference slogan, that it “just means more” in the SEC. That was certainly the case on Wednesday.

Beamer was approached for his signature, which of course has been the case many times before. This time, however, he was asked to sign a prayer candle with his own face on it. It was a first for the Gamecocks head coach, who has since been given a new nickname.

Shane Beamer said he signed a prayer candle with his face on it tonight.

He’d been dubbed “St. Beamer” and the gentleman who owns it says South Carolina is 4-1 since he got it.

After giving the candle his John Hancock, Beamer took a photo with the fan, who believes whole-heartedly in the power of the candle. And once the event wrapped up, Beamer posted a photo of the prayer candle and shared how much he loved it.

This was awesome !! And definitely a first for me …Thanks!!

This prayer candle was first lit before our win over Florida!! Keep on lighting it !! 😃

Whether the candle will bring success to South Carolina or not, we will have to wait and see. Either way, it just means more in the SEC.