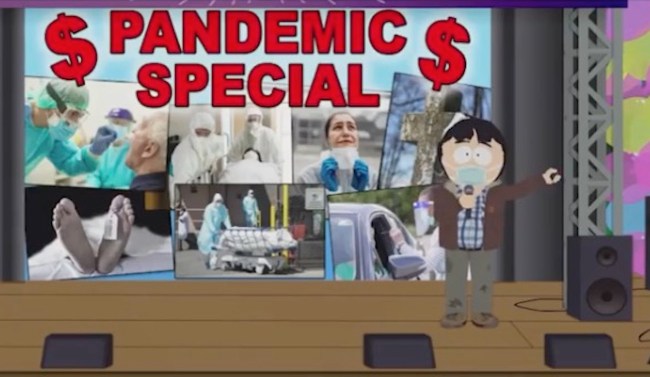 Something about South Park provides me the same comfort I feel when seeing an old friend. You know that buddy from high school who wasn’t necessarily your best friend but you just VIBBED anyway? That’s sort of my relationship with South Park — it’s not my favorite show nor is it something I tune into religiously, but when the two of us do cross paths, it feels like old times again.

To be honest, I don’t watch the series as much as I used to, especially compared to a decade or so (whether I was in high school or college) when Wednesday night episode of South Park was essentially appointment television.

But when South Park speaks, I listen, especially when they’re set to tackle what’s easily been the worst year in America since the series first began all the way back in 1997. This year has been so righteously chaotic, in fact, that South Park has put together its first ever one-hour-long episode in order to tackle the almighty screw job that has been the pandemic.

Here’s the official synopsis for the special, via Comedy Central:

“Randy comes to terms with his role in the COVID-19 outbreak, as the ongoing pandemic presents continued challenges to the citizens of South Park.” Meanwhile, the kids “happily head back to school, but nothing resembles the normal that they once knew — not their teachers, not their homeroom, not even Eric Cartman.”

As far as I can tell, this one-hour special has nothing to do with season 24 of South Park, which has still yet to be given a release date. At this time, the iconic Comedy Central cartoon is currently slated to air through a 26th season.