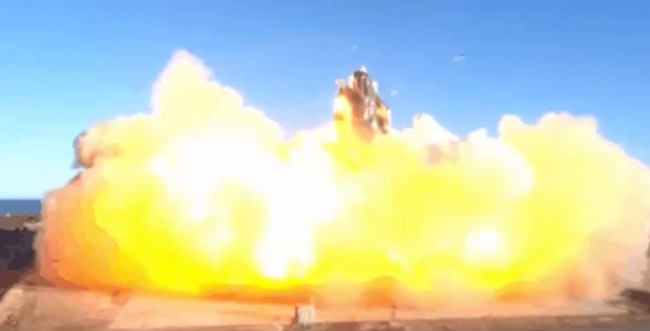 SpaceX’s new prototype space vehicle was enjoying an impressive launch and suborbital test flight, and nearly returned safely back to Earth in one piece until the very last second when it exploded.

The Starship is a 165-foot-tall stainless-steel spacecraft that is powered by a massive rocket called Super Heavy. The vehicle is ultimately expected to reach the moon and Mars and then launch itself without extra rockets. The Starship is made to be reusable, unfortunately, this particular spacecraft will not be reused since it has been vaporized to smithereens.

The Starship launched on Wednesday afternoon in Cameron County. During the vessel’s descent, this Starship experienced a rapid unscheduled disassembly event. The Starship performed a landing flip maneuver, but the rocket couldn’t slow the Starship enough, and it collided with the ground – exploding on impact and flames could be seen from a far distance away.

JUST IN – @SpaceX's giant Starship almost had a good landing.pic.twitter.com/bvVn16UZNK

The SN8 prototype could not slow itself down and #SpaceX just had a nice BOOM. pic.twitter.com/i0z5dcuyPj

This is history in the making and I fucking love it! 🔥🔥🔥#SpaceX @Erdayastronaut 🚀 pic.twitter.com/6UdHT5jf1c

Fuel header tank pressure was low during landing burn, causing touchdown velocity to be high & RUD, but we got all the data we needed! Congrats SpaceX team hell yeah!!

SpaceX warned that this test flight had a high chance of a failed landing.

“With a test such as this, success is not measured by completion of specific objectives but rather how much we can learn, which will inform and improve the probability of success in the future as SpaceX rapidly advances the development of Starship,” SpaceX said before the launch.

Musk cautioned, “Lot of things need to go right, so maybe 1/3 chance” of the rocket landing in one piece.

SpaceX has produced ten serial prototypes of the Starship, and the space company noted that SN9 is “almost ready to move to the pad.”

The Starship program aims to usher in “a fully reusable transportation system capable of carrying both crew and cargo to Earth orbit, the Moon, Mars, and beyond.”