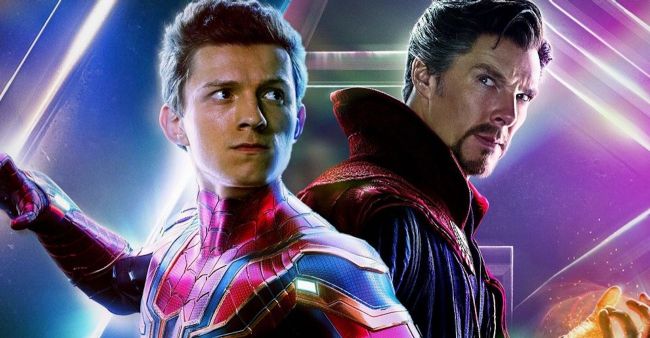 Despite the fact that we’re now just about six months away from the release of Spider-Man: No Way Home, marketing for the film has yet to kick in, as fans are still eagerly awaiting their first glimpse at a teaser for the assuredly insane film. Plus, with Black Widow just a week away from being released, many expected the No Way Home trailer to be attached to the Marvel Cinematic Universe’s first Phase 4 film. Alas, it remains all quiet on the trailer front.

Now, that said, just because a trailer hasn’t been released does not mean that Disney and Sony’s massive marketing machine hasn’t been kicked into gear yet, as Marvel has quietly released first-looks at the upcoming merch for the film that actually raises more questions than they answer, primarily, why does Spider-Man appear to be shooting a web through one of Doctor Strange’s spell-circle-thingys?

Given the title of the film and the impending arrival of the multiverse, we already knew Spider-Man was going to find himself traversing through the universe, potentially even winding up stuck somewhere, but is he doing so with Doctor Strange’s powers on his own? Or has Doctor Strange taught him the tricks of the sorcerer trade in order to defeat the coming threat?

Spider-Man: No Way Home — the fourth film in the Marvel Cinematic Universe’s Phase 4 following Black Widow, Shang-Chi and the Legend of the Ten Rings, and Eternals — stars Tom Holland as Peter Parker/Spider-Man, Zendaya as MJ, Benedict Cumberbatch as Doctor Strange, Jamie Foxx as Electro, Alfred Molina as Doctor Octopus, Marisa Tomei as May Parker, and perhaps a few more surprises, such as Andrew Garfield and Tobey Maguire as Spider-Man, although their returns have yet to be confirmed. The film will hit theaters in the United States on Friday, December 17.