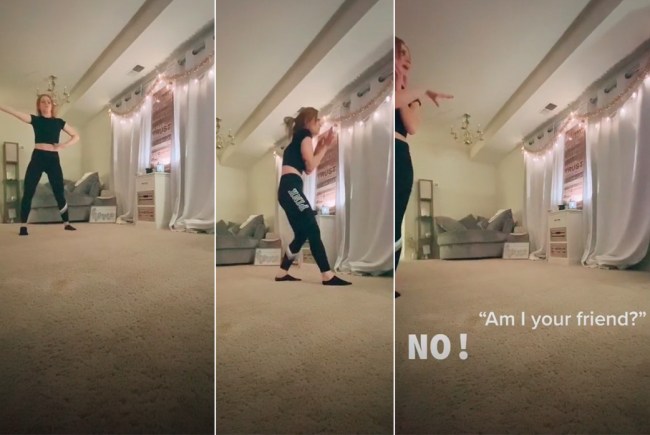 This Maryland woman is probably incredibly thankful people love watching dancers on TikTok. The trend inspired her to post her own dance videos, the latest of which catches a stalker creeping into her apartment to show the police.

Hannah Viverette was in the middle of a dance video on TikTok when an intruder climbed into her second-floor balcony and opened her apartment door.

That moment when you’re recording yourself dancing and your stalker climbs your second story balcony to break in. #realshit #scariestmomentofmylife

Viverette went into detail about the incident on her Facebook page, explaining she was home alone around 10:20pm when she heard her balcony door “begin to open.”

She wrote in the caption:

Welcome to the scariest moment of my life, crazily documented.

Absolutely unreal that I got it on video…

As many people know, I love to dance. It is my outlet, my meditation, my safe place. More than not, I am recording my movements on my phone.

On Sunday night at approximately 10:20pm I was alone, in the privacy of my home, music up, dancing, AND recording. In a moment with my eyes closed, I heard my second story balcony door begin to open. Startled, I immediately moved towards the door to close it, only to realize there was a man behind the force. A face I had seen almost daily in my apartment complex area since moving in, but never spoke a word to. A man that has made a point to watch me and make many uncomfortable advances at me from a distance, for months now. For so long I brushed it off, assuming him to “just be a creep”.

It was the moment I came face to face with him at my door that I knew he was there to harm me. He kept his hands in the pockets of his hoodie with a smirk on his face. He mumbled something in Spanish, and then proceeded to take a step in and I heard “friends?”…. “are you sure?”…

I was able to seek safety at a neighbors and call 911. Afterwards, finding out that my intruder had unplugged my Christmas lights that were tightly wrapped around my balcony post, and had cut/tore approximately 2 feet of cord from it.

Y’all, his name is ANGEL MOISES RODRIGUEZ-GOMEZ (DOB: 7-10-84) and he is a resident in the building across the street from me. He admitted to climbing up on my balcony only because he thought I took his picture (right before he closed the door to leave)- but he of course told a very different story. He said that he was invited up. What. YALL. He was arrested last night, and released on bail today.

This cannot be the first attempt he’s ever made to act on stalker behavior. If anyone knows ANYTHING about this man or have ever felt/been uncomfortable/harassed, assaulted in ANY way by him, PLEASE SPEAK UP!!

Police arrested Rodriguez-Gomez, but according to Heavy, he was released on bail on Nov. 25th.

Hopefully, Viverette put extra locks on her doors and windows and contacted a realtor.