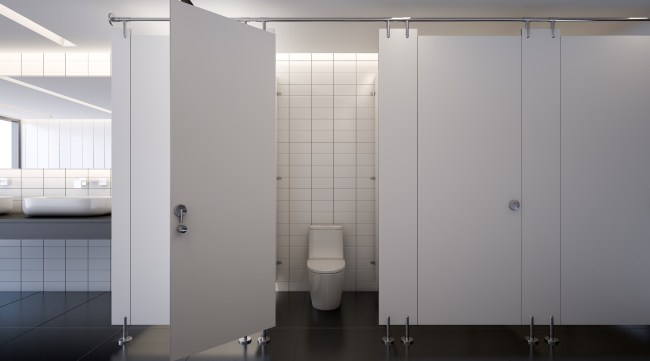 The bathroom break is the right of every worker. It’s an individual’s time to hide from the misery of work for a few minutes and relieve themselves.

There have been countless studies published throughout the years of how much time and money bathroom breaks cost businesses over the course of a year but those studies are complete bullshit because what’s a guy supposed to do, not take a dump? When nature calls, you answer.

Now, some evil scientists are trying to reduce the time spent on the porcelain throne by developing a sadistic toilet that’s slanted downward at a 13-degree angle. By sloping forward slightly, this awful toilet forces the sitter into a ‘power thrust’ position that causes them to evacuate their bowels quicker and thus spend less time on the crapper.

If you’ve ever sat on a toilet that has been installed wrong and is even the slightest bit sloped then you already know how annoying this can be but the company’s somehow selling this abomination as a revolutionary product…And they might actually be right, the jury’s still out. Thankfully, this sloped toilet only exists in Great Britain at the moment but that doesn’t mean our precious bathroom time isn’t in danger in the near future.

An extended office bathroom break could be a thing of the past thanks to a new toilet that developers say will make people want to leave the loo after five minutes.
The ‘StandardToilet’ has been backed by the British Toilet Association (BTA), a group that campaigns for better bathroom facilities in offices and public spaces.
The seat is sloped forward by about 13 degrees to increase strain on the legs similar to a gentle squat thrust, according to developer Mahabir Gill from StandardToilet.
The Staffordshire based company says it has already had interest from local councils and motorway service stations for the £150 – £500 toilet. (via)

"It is easy for an academic at a round table to claim that we live in a post-ideological universe, but the moment he visits the lavatory after the heated discussion, he is again knee-deep in ideology." (Žižek) [link via @AnChVIE]https://t.co/sSnbO6Z8df

The company is also spinning this as good for the body. It’s said that a standard toilet can cause medical issues down in your butt and this toilet would alleviate those problems, supposedly.

They hope to also target offices as they believe cutting down on the length of employee bathroom breaks would dramatically improve productivity.
‘It is estimated that in the United Kingdom alone, extended employee breaks costs industry and commerce an £4 billion per annum’, Mr Gill said.
‘With the advent of flexible zero hour contracts it is easy to see why our StandardToilet can be an asset to a business.’
He says it provides health and wellbeing benefits through improved posture and encouraging less time sitting on the toilet.
‘Medical studies have suggested that using the traditional WC can cause swollen haemorrhoids and weakening of pelvic muscles. (via)

Toilets that are tilted downwards by 13 degrees to stop workers spending too long on the loo https://t.co/s9DVtO2q1M pic.twitter.com/MIQiRidBxp

First, they came for your cigarette break and you said nothing because you knew deep down that you needed to quit smoking anyway because it’s horrendous habit that was going to kill you eventually. I should know, I was a chain smoker for the better part of the decade before quitting cold turkey. But then they came for your bathroom break and that’s when it was time for an all-out riot.

Why did they choose 13-degrees for the slope? Well, because that’s the maximum angle that will piss off an employee but won’t cause any problems.

The toilet has been sloped at 13 degrees as it is inconvenient for the employee but not harmful, in fact it could have some health benefits around improving posture, according to Mr Gill.
‘Anything higher would cause wider problems. Thirteen degrees is not too inconvenient, but you’d soon want to get off the seat’.
He said he was inspired by time working as an engineer when he would find workers asleep on the toilet or from queues for public restrooms. (via)

Who the hell sleeps on the toilet at work? Haven’t they ever watched the episode of MythBusters where they tested to find the levels of fecal matter throughout a bathroom, kitchen, and office? There’s literally shit on EVERYTHING. And they’re sleeping in that? If you’ve ever fallen asleep in the bathroom you deserve to get sick. Plain and simple.

In developing this toilet, researchers found that the average bathroom break in London’s offices ranged 28 minutes and 35 seconds which seems insane when you consider that most people are using the bathroom several times throughout the day and that adds up to multiple hours on the shitter. But is a miserable toilet designed to force us into a ‘power thrust’ position really the answer? Hell, no.

If you want to read more about this toilet, see diagrams of what it looks like, and prepare yourself for a future without a luxurious bathroom break you can click here to visit the Daily Mail.