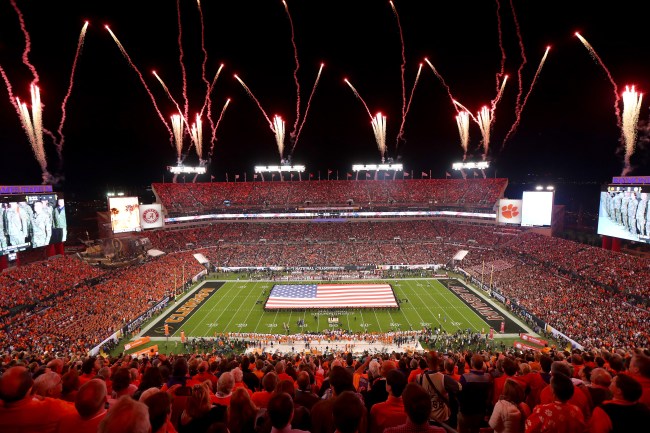 Could “The Star Spangled Banner” be replaced as the national anthem?

In the past few weeks amid social tensions in the country, there has been growing momentum coming from activists to replace The Star-Spangled Banner as the national anthem due to the fact that it was written by slaveowner Francis Scott Key

An online petition was recently created to change the national anthem to “America the Beautiful.” https://t.co/KsfstjYN9Z

Yahoo music writer Lyndsey Parker brought on activist and journalist Kevin Powell to explain why Scott Key is such a problematic figure in American history.

Is it time to replace ‘The Star-Spangled Banner’ with a new national anthem? https://t.co/Ywtp5PcS3C pic.twitter.com/TyKMmZ2S8z

“‘The Star-Spangled Banner was written by Francis Scott Key, who was literally born into a wealthy, slave-holding family in Maryland,” explains Powell. “He was a very well-to-do lawyer in Washington, D.C., and eventually became very close to President Andrew Jackson, who was the Donald Trump of his time, which means that there was a lot of hate and violence and division. At that time, there were attacks on Native Americans and Black folks — both free Black folks and folks who were slaves — and Francis Scott Key was very much a part of that.

In fact “The Star-Spangled Banner,” based on a poem Key wrote about his eyewitness account of the War of 1812, originally featured a little-heard third stanza that was blatantly racist: “No refuge could save the hireling and slave/From the terror of flight or the gloom of the grave/And the star-spangled banner in triumph doth wave/O’er the land of the free and the home of the brave

Powell goes on to suggest that John Lennon’s “Imagine” could replace the Star-Spangled Banner as the national anthem.

If “The Star-Spangled Banner” goes the way of the Confederate flag and Gone With the Wind, what should America’s new national anthem be? Whatever it is, Walker says there should be a formal “vetting process” to make sure the next anthem doesn’t have a terrible past; Powell, for his part, suggests John Lennon’s “Imagine,” which he says is “the most beautiful, unifying, all-people, all-backgrounds-together kind of song you could have.”

The statue of Francis Scott Key, who is known for writing "The Star-Spangled Banner" but was a slave owner, was toppled by protesters in San Francisco during demonstrations against racial injustice. https://t.co/Z0rMjTQFCz pic.twitter.com/omtiqXOTex