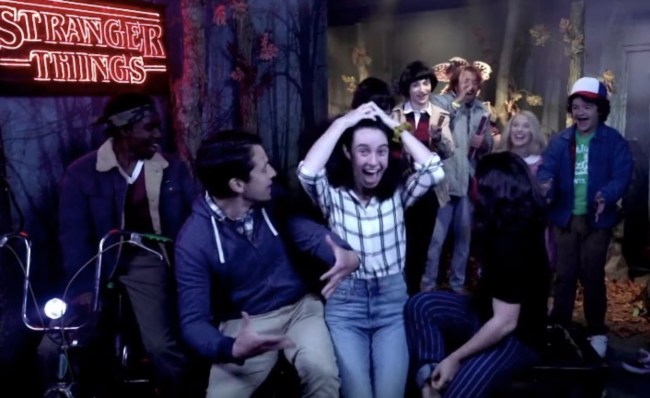 The cast of Netflix’s Stranger Things is doing their typical media whirlwind leading up the launch of Season 3 on the 4th of July. I don’t think it’s hyperbole to say this is the most highly-anticipated TV show of the Summer because Seasons 1 and 2 have both been enormous successes both critically and with fans.

I’m not into prank videos these days. Those died out on YouTube years ago. But this one is reminiscent of those famous Haunted House photos of a cameraman snapping pictures of people in a haunted house when they were losing their complete shit.

The young cast of Stranger Things teamed up with Jimmy Fallon for this prank and they went to the Madame Tussauds Wax Museum in NYC’s Times Square where fans posed for photographs with what they believed to be wax statues from Stranger Things in a new exhibit. Only they weren’t wax statues at all, it was the actual cast members.

Fans then lost their minds when they realized those statues were moving, and not only were they moving but it was Millie Bobby Brown and the rest of the squad along with Jimmy Fallon:

What I don’t get about Stranger Things is how there are still EXTREME haters out there. You can hate the show. Obviously. If it’s not your thing then it’s not your thing. But I came across a few tweets last week from media personalities calling it one of the most overrated TV shows which makes ZERO FUCKING SENSE at all.

There’s a legitimate consensus that it’s one of the best TV shows out there right now. It is the 8th most popular TV or movie on IMDB with a critic’s score of 8.9 out of 10 (from over 600,000 ratings). Season 2 only had one episode with an IMDB score below 8.4 with several episodes rated over 9.0.

READ NEXT: Someone’s Dying In ‘Stranger Things 3’, So Who’s It Going To Be?

I just don’t get the need to shit on something as ‘overrated’ because you don’t like it. I’ve never watched a single episode of Anime in my life. In fact, I wouldn’t even know where to watch Anime if I had to.

It’s not my thing and I’m certain that it never will be but I recognize that there are millions of people in the world who are into it and I’d never throw myself out there bashing it just because it doesn’t fit with my tastes. I’ve just never understood this inclination to brand something as ‘overrated’ because it doesn’t fit with your tastes. Anyway, that’s my rant. Carry on.