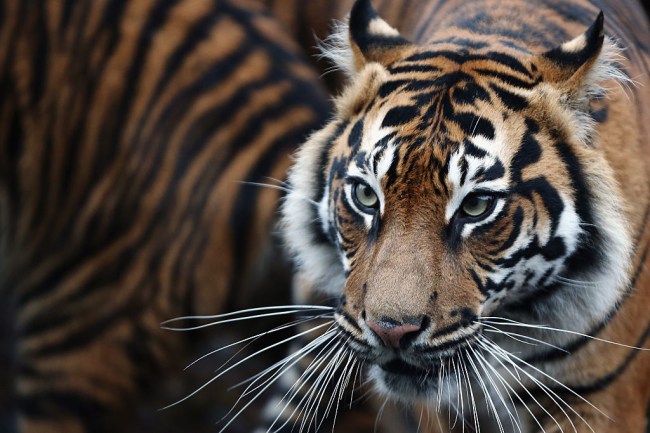 The London Zoo played matchmaker last week when they brought in a new Sumatran tiger to mate with the Sumatran tiger that already lived there. It didn’t quite go as planned. Instead of having sex and making baby Sumatran tigers, the new tiger killed the other tiger. Worst. First. Date. Ever.

The Sumatran tiger species is endangered and said to only be between 400 to 600 Sumatran tigers left on the planet. There has been efforts to extend the life of the species by breeding the rare tigers in zoos around the world. On January 30th, the London Zoo jubilantly introduced the male Sumatran tiger Asim. The male tiger arrived from Denmark as part of a European-wide conservation breeding program.

Meet our latest arrival ❤️ Seven-year-old Asim, whose name means ‘Protector’ in Arabic, has moved from @ReeParkSafari. He's been busy exploring his territory – we’ve spotted him lounging on his heated rocks and dipping his paws in his new pool! https://t.co/naH2dO8sKU #ZooLife pic.twitter.com/v2U8i2T436

“Asim is a handsome, confident cat who is known for being very affectionate with the ladies in his life – we’re hoping he’ll be the perfect mate for our beautiful Melati,” London Zoo’s head tiger keeper Kathryn Sanders said in a statement in January. Asim was expected to mate with Melati, a female Sumatran tiger who had lived at the London Zoo since 2012. Asim had other ideas.

On February 8th, the London Zoo had a much more somber tone as they announced the death of Melati.

Today our beloved Sumatran tigress Melati died while being introduced to new male Asim for the first time. Everyone at ZSL London Zoo is heartbroken by this turn of events. Tiger Territory will remain closed while our team focus on caring for Asim: https://t.co/KAoW0rziPN pic.twitter.com/CHcVKKMdz4

The stress of Valentine’s Day is too much to take, even for male Sumatran tigers. “Everyone at ZSL London Zoo is devastated by the loss of Melati, and we are heartbroken by this turn of events,” the zoo said.

For days before their first date, the two tigers were held in adjoining enclosures so they could “see, smell and react to each other.” The London Zoo said, “As with all big cats, introductions, however carefully planned, are always considered to be high risk.”

“Their introduction began as predicted, but quickly escalated into a more aggressive interaction,” according to the London Zoo. The staff at the zoo used flares and alarms to try to distract the tigers, but they kept attacking each other. It was too late, the 7-year-old Asim mauled the 10-year-old Melati to death. Asim has nobody to blame when he is forever single.