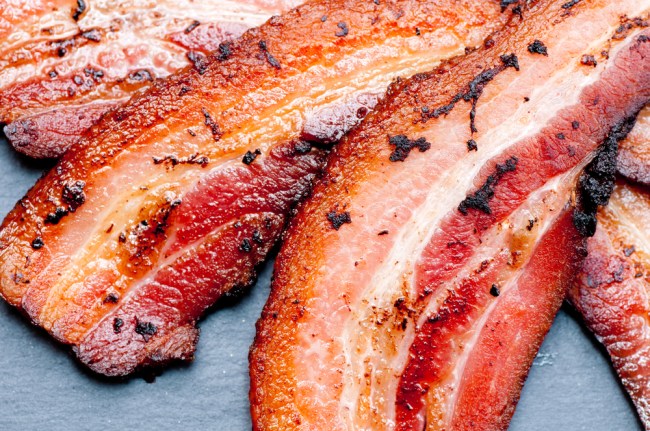 Most of the ‘Food blogger’ creations you see on the Internet are foods that taste like crap but look stunning in photographs. I’m convinced that most bloggers and their 50,000+ Instagram accounts don’t even eat 75% of the dishes they take pictures of because if they did, they’d realize the flavor combinations they’re putting on Instagram actually taste like shit…This is why I’m particularly fascinated by the Swineapple.

The Swineapple is a pineapple that has been stuffed with pork and wrapped in bacon. If you’ve ever had Al Pastor tacos you already know how delicious the flavor combination of Pork + Pineapple is. The complimentary juices make it one of the tastiest combos on the planet, and that’s precisely why people are geeking out over this creation:

@Vash_505 #foodporn we had swineapple for dinner today! Pork inside a pineapple and wrapped in bacon! 5 hours on the barbecue! NOMS! pic.twitter.com/SWWVFiQrlG

The Swineapple began trending on Twitter overnight, and BuzzFeed‘s ‘Tasty’ even put together an easier Swineapple recipe for people who want to start small: swineapple sausage dogs.

OMG these grilled swineapple dogs are gonna steal the show at your next BBQ 😱 🍍 🌭! / / FULL RECIPE: https://t.co/Ign0VBMsec pic.twitter.com/y3Wqggy0qW

Meet the Swineapple, which is exactly what it sounds like 🍍🐷

I’m approximately 1,176 miles away from my grill at the moment. I’ve up at the BroBible NYC office all week to catch Phish at MSG for the Baker’s Dozen run, but as soon as I get back down to Florida I’m trying this recipe out because it looks divine.