Move Over Doritos, Taco Bell Is Selling Their Own Line Of Hot Sauce-Flavored Tortilla Chips 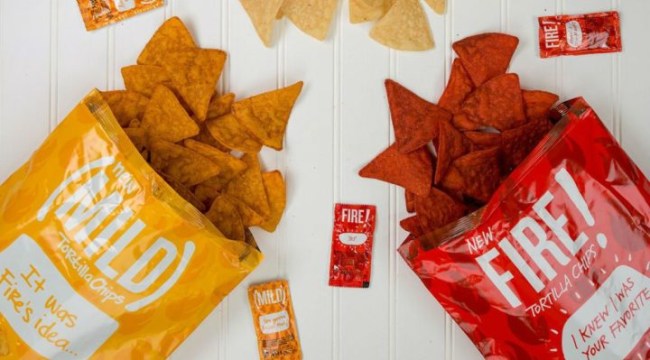 “Our sauce packets are one of the brand’s most unique aspects and were the natural choice for both the flavors and packaging of our tortilla chips,” Taco Bell chief brand officer Marisa Thalberg said. The tortilla chips will come in three different flavors based on Taco Bell sauces, including “Classic,” “Mild,” and “Fire.”

“Classic” chips are seasoned with salt, then the T-Bell-inspired “Mild” chips feature flavors from chili peppers and cumin, and “Fire” will boast spicy tastes from jalapeño, chili peppers, and paprika flavoring. The chips will be sold at grocery stores nationwide starting in May right next to their cousin, Doritos, which is also owned by PepsiCo. Prices for the chips were not announced.

“There are no plans to replace the Doritos Locos Tacos shells with these chips flavors,” a Taco Bell spokesperson said. “We’ve developed many successful products working with Frito-Lay, like the Doritos Locos Taco and Beefy Crunch Burrito. However, these tortilla chips were not a collaboration. We wanted to create tortilla chips that stood out as uniquely Taco Bell, in both their sauce packet flavors and packaging.” This is great news, but where’s the “Hot” and “Diablo” chips at?

It’s out of the bag. Taco Bell Tortilla Chips are coming this summer. pic.twitter.com/cd22srcHsH