Tanker Truck Nearly Plows Into Large Gathering Of Protesters At Full Speed, Driver Gets Chased Down By Crowd And Pulled Out Of Truck Before Police Arrest Him 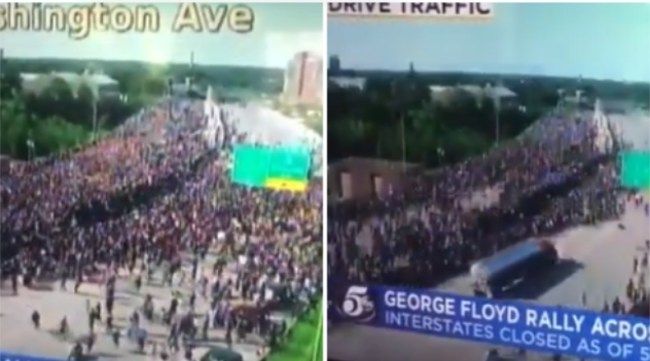 A scary situation unfolded in Minneapolis when a tanker truck nearly plowed into a large group of protesters on the Interstate 35W Bridge. The group was taking a knee to peacefully protest the death of George Floyd at the hands of the police.

JUST IN- Truck driver who drove toward crowd of protestors on I-35W has been arrested.

We’re told none of the protesters were injured #GeorgeFloydProtests #Minnesota @KSTP pic.twitter.com/TWCd2VhFoF

The Minnesota Department of Public Safety says a tanker truck driver is in custody after speeding through protesters on the Interstate 35W Bridge in Minneapolis Sunday.

DPS officials say no protesters were seriously hurt. The driver, who was pulled out of the truck and attacked by protesters, was taken to Hennepin Healthcare with non-life threatening injuries.

There were thousands of people on the

Other videos show the crowd chase down the man and pull him out of the truck. Police then maced the crowd to apprehend the driver moments later.

UPDATE: Truck driver under arrest and taken to hospital after driving towards protesters on closed interstate in Minneapolis, after which he was pulled from the vehicle pic.twitter.com/9KmMPcioc2

Breaking News: At a Minneapolis protest a man in the semi truck plowed thru the crowd.
The protesters got the guy out of the truck & jumped him.
Police maced the crowd & got the driver.
It is believed the driver is in police custody.#minneapolisriots pic.twitter.com/a95gCfp5Q2

While protestors were taking a knee on I-35 a semi truck driver ran into protestors. The police have arrived macing protestors instead of going after the truck driver. pic.twitter.com/BmqFseSmUJ

As of now, it’s unclear how the man got on the interstate considering all roads were closed by police.

State Patrol: Driver of semi that drove into thousands of protesters on Interstate 35W in Minneapolis has been arrested. No protesters appear to have been hurt, according to State Patrol. MNDOT working to determine how the semi got onto 35W https://t.co/ti4famHwGK