Tasty Tune Tuesday 1/18: The Ninth Edition Will Have You Dancing Right Along With A Smile 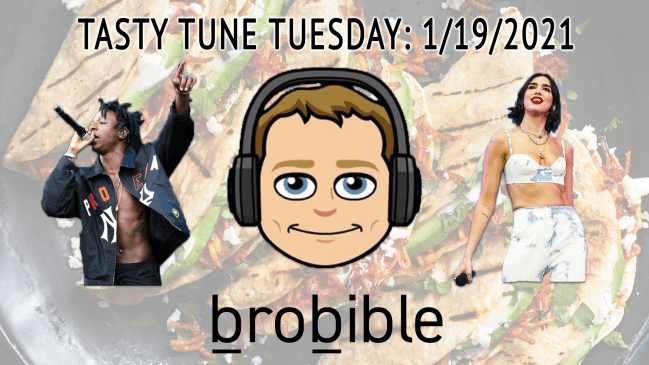 Everybody could use a pick-me-up after the long weekend and new music always fills that void! On the third day of every week, I’ll drop ten songs that tickle my eardrums. Variety of tracks will range from hip hop/rap, EDM, country, singer/songwriter, Americana, R&B and everything in between— something for everyone depending on what I’m jamming that week.

This collection of cross-genre tunes is intended to make you tap your toes and get up from the desk chair and dance. Here’s the tracklist:

Track No. 1: The Worst In Me – KAYTRANADA, Tinashe

For Tinashe to hop on a track with KAYTRANADA is a bit of an unexpected collaboration, but it couldn’t have worked out any better. The funky electronic beat allows Tinashe to float over hi-hat and bass for an upbeat, head-bobbing sound that stays true to classic Kaytranada.

The entire Future Nostalgia album is killer and Dua Lipa is taking over the world. This vintage bubble-gum pop song is simple enough to fit the mainstream category, but puts just enough spin to make it stand out. In some ways, it plays into the sound of British pop stars Amy Winehouse and Lily Allen, who are both known for bringing retro sounds to the forefront in ways that are intricately unique. There isn’t much to the lyrics and the premise is simple, but it works.

Two of the best “jazz rappers” out there joined forces on this one. The soul-sampling instrumental allows the two lyricists to lay down a couple of fire verses and they really bring out the best in each other. Nyck dives deep into his bag.

Most of what Fresco Trey puts out are feel-good anthems that lift you up and this one is literally titled to that notion. You’re greeted by a fun instrumental that smooths out the melody and lets Trey’s vocals take centerstage. The sound is unlike most of the music that comes out of Memphis but what he does works.

Track No. 5: This Damn Song – Pecos & The Rooftops

This Damn Song brings hints of rock and roll into the Texas country western world. Pecos Hurley is the front man and brings a sound that is super different than most of the others in his genre— the tone is bourbon-kissed and the soul is evident.

Simple EDM music at its finest. The vocals are longing and optimistic before the song blows out the speakers with a drop that blossoms on cue.

I had never heard of Del Water Gap before I discovered this collaboration with Maggie Rogers, but I am glad I did. He opens this soft, coffeehouse rock tune while Rogers soon follows with her artsy sound. The love ballad is a perfect mix of Americana, singer/songwriter, indie and folk.

Ferg dropped this track at the end of last year and insists that he is still a part of the A$AP Mob. The Harlem Rapper joins forces with Monica’s R&B feel and starts spitting from the jump over a fun piano-based beat.

Track No. 9: Heaven’s Only Wishful – MorMor

Keep your eye out for Kat Hasty and her strong pipes in the Texas country scene. She is starting to take in that sphere of the industry and has a good chance to reach the top of the charts across the field. This is her biggest track to date.