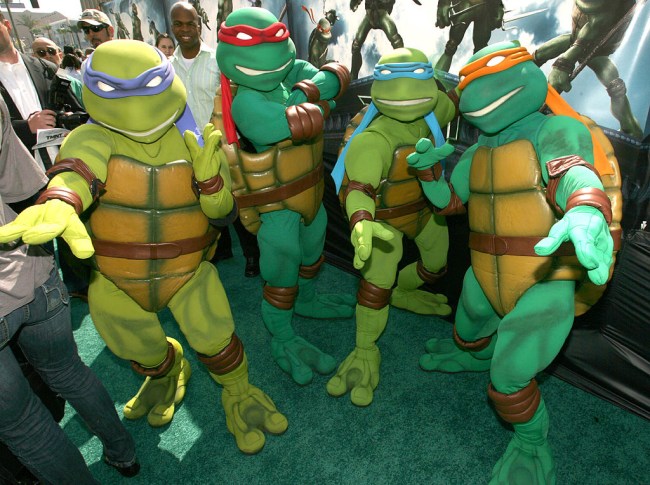 There have been a number of different takes on the quartet over the years, and while the two that hit theaters last decade featured a more mature interpretation of the squad, I feel like there’s one major trait that’s been largely overlooked, because (despite the anti-drug PSAs they’ve starred in over the years), those dudes definitely do some weed.

On Tuesday, Deadline got my hopes up when it revealed Seth Rogen has signed on to produce yet another film about everyone’s favorite crime-fighting…um…whatever type of animal a turtle is. He’ll be joined by his longtime writing partner Evan Goldberg to develop the film, which will be entirely computer-generated as opposed to a hybrid of special effects and actual actors.

I was hoping this was being designed with an older audience in mind but it seems fairly unlikely that will be the case, as Nickelodeon is partnering with Paramount to bring it to fruition. With that said, I couldn’t resist dreaming up what a Teenage Mutant Ninja Turtles movie might look like if Rogen had free reign to write whatever the fuck he wanted.

We open with an obligatory shot of steam wafting from a manhole that is basically a requirement for any movie that takes place in New York City. From there, we are transported underground, where we discover the vapor is actually smoke after seeing the Turtles pass around Donatello’s staff, which doubles as a giant steamroller. Michelangelo orders a pizza but is so high he forgot that he already ordered a pizza. Raphael calls him “a real pizza work” and he is roasted by the rest of the gang who pull out other pizza-related puns like “Cheesus crust” and asking if he ordered a “Highwaiin” pie.

They are contacted by April, who tells them she has received a tip. Sex jokes ensue, which will become a recurring theme because she’s a female character in a movie Seth Rogen is involved in. She tells them that the Foot Clan has set up shop in Times Square and is engaging in some sort of illicit activity disguised as mascots and other street entertainers.

The Turtles head there and assess the situation. A fight ensues after Leonardo refuses a mixtape from an aspiring rapper, who is actually a member of the Foot Clan in disguise and is hiding throwing stars in the CD cases he’s holding. Michelangelo is distracted by a naked woman in body paint, who is also a ninja who kicks him in the balls. He gets up and starts swinging his nunchucks, only to hit Donatello in the balls.

They all eventually recover and Raphael breaks the Naked Cowboy’s guitar over his head only to discover it’s filled with weed. Leonardo slices through Elmo’s head with his sword, decapitating the person inside and also ripping it open to reveal it’s filled with weed. The naked woman turns out to be a ninja wearing a realistic human suit with breasts filled with weed. They encounter someone dressed as one of them and Michelangelo says “I know ninjutsu” while attempting a Keanu Reeves impression and manages to knock the guy clear out of his suit. The shell is filled with weed. Once their opponents run away, they celebrate their victory by smoking a bunch of weed and going to Olive Garden.

April calls again to let them know she’s received another tip, this time from an anonymous source. Raphael says, “Kinky.” She claims Shredder is running his operation at the top of the Empire State Building, where he set up shop after eliminating the competition to run the only delivery service in the city. The Turtles get on the elevator, which they promptly hotbox. Michelangelo realizes that they get their weed delivered and they all realize they’ll lose their connect if they defeat Shredder. They reach the top and their foe is waiting for them when the door opens but Leonardo informs him it’s all good and the elevator closes.

They head back to the sewers, where Donatello tells them he has a surprise and reveals he’s managed to turn his staff into a functioning bong. They pass it around until the entire screen is filled with smoke and the credits roll.

Seth, if you’re reading this, feel free to borrow whatever you want.