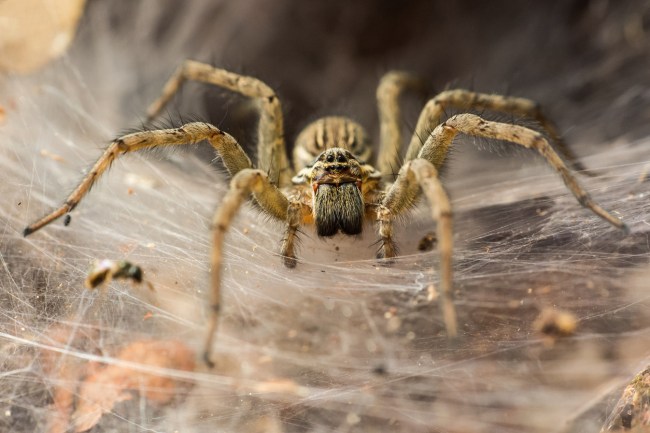 In a battle between spiders and bats you would normally have to give the advantage to bats because of their generally larger size and for their ferocity for eating insects. A single little brown bat can eat up to 1,000 mosquitoes in a single hour and up to 4,500 insects in one night of hunting. But this spider in this creepy video is not your typical spider and one unfortunate bat learned the hard way.

We take you to Poteet, Texas, approximately 30 miles south of San Antonio and the birthplace of country music star George Strait. That is where one spider turned its predator into its dinner.

One morning, Annette Alaniz Guajardo noticed that a spider on her property had caught something in its web. After further examination, she saw that it was a bat. She returned home and wanted to see how the bat and spider were getting along.

The large web on the side of her house was still there when she returned and the bat wasn’t doing so well. The bat was dead and was enjoying a fresh meal.

This new Spider-Man versus Batman movie is weird.

It turns out that there are bat-devouring spiders on every continent except for Antarctica. The hungry arachnids create orb-webs up to 5 feet wide to snare the flying bats and the webs are some are strong enough to not break if a bat collides into it mid-flight.

Once the bats are entrapped in the webs, the flying rodents can die from exhaustion, starvation, dehydration or overheating. There have been documented instances when the spider kills the bat before it dies.

Sorry bats, the arachnids have won this round.