The Mountain Is The Newest Colonel Sanders, But KFC Should Have Gotten Another ‘Game Of Thrones’ Character 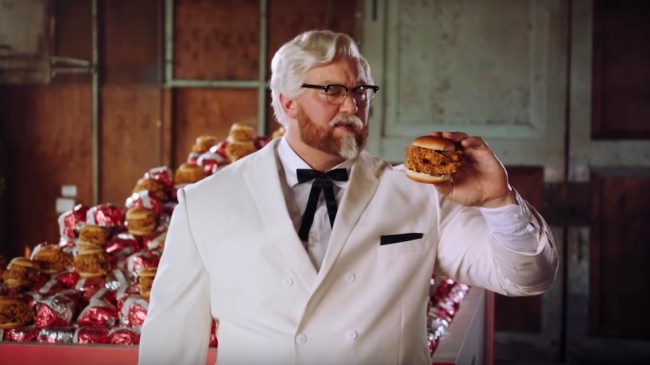 You can’t miss the new Colonel Sanders. KFC’s beloved pitchman seems to have gotten bigger. A lot, a lot, a lot bigger. No way he got THAT ginormous just by eating fried chicken sandwiches; he should probably be tested for performance-enhancing drugs. The latest version of Colonel Sanders is Hafpor Julius Bjornsson AKA The Mountain from Game of Thrones.

KFC has featured many different faces as Colonel Sanders. Originally, SNL mainstay Darrel Hammond was the colonel starting in 2015.

Then Norm MacDonald was Colonel Sanders.

Then comedian Jim Gaffigan was Colonel Sanders. One would think he’d be a better pitchman for Hot Pockets than fried chicken.

Then the George Hamilton, who is already extra crispy himself, was the colonel.

In September 2016, Rob Riggle took over the Colonel Sanders gig.

Only a few weeks ago, Jason Alexander AKA George Costanza became the iconic chicken salesman.

RELATED: Taco Bell Turns Up The Heat With New Rattlesnake And Reaper Ranch Fries, But The End Is Near For Nacho Fries

The Colonel has grown in stature so much in only a few weeks because now we have Gregor “The Mountain” Clegane as Colonel Sanders. Hafpor Julius Bjornsson is here to promote KFC’s new Double Crispy Colonel sandwich. This is a perfect casting since the 6-foot-9, 400-pound Björnsson is double the size of the other colonels. Also, that’s one gigantic white suit.

The champion of the 2018 World’s Strongest Man competition drags around 700 pounds of Double Crispy Colonel sandwiches and you had better eat one if you don’t want your skull crushed.

How KFC didn’t get The Hound from Game of Thrones to be their chicken spokesperson seems like a missed opportunity.

The always entertaining Daym Drops has a super official review on the Double Crispy Colonel Sandwich.