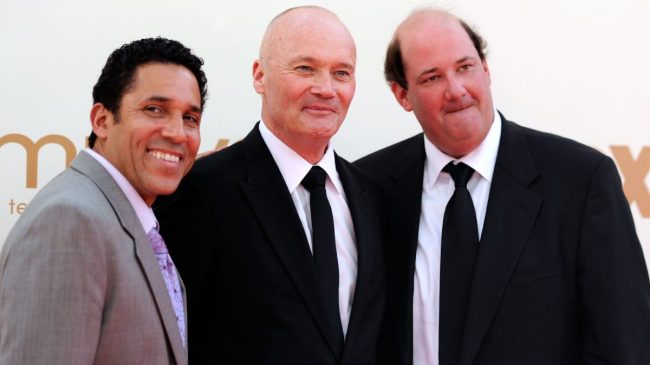 If you’re a fan of “The Office” then you already know the scene.

A homophobic Michael Scott tries to prove his acceptance of newly outted accountant Oscar. And he does it the best way he knows how, with a kiss.

This action will make a statement to his co-workers, ultimately proving to everyone in the workspace that Michael is inviting of all backgrounds and orientations (while also keeping Oscar from leaving his job at Dunder Mifflin).

The incredibly awkward scene is one of the show’s best.

The kiss, combined with the reaction and commentary from the supporting cast are laugh out loud funny.

The story has as much to do with what was going on in Nunez’s professional career as anything else.

Nunez said that after working two seasons with “The Office,” he was offered an opportunity with Comedy Central. He didn’t want to leave the show, but also didn’t want to pass up the new role. Co-worker Steve Carrell then gave him some advice on how to handle the situation.

Carrell said, “It’s not your job to say no to jobs, Oscar, your job is to get jobs… Let NBC work it out with your managers… Don’t say no to anything.”

Nunez, relieved from the words of wisdom, did just that.

He continued on with “The Office,” and when the time came, writers gave him an out while keeping the door open for a return once his Comedy Central role finished up.

The kiss scene was written, though many members of the cast say that it was further improvised by Steve Carrell.

Oscar Martinez would take an all-expenses paid vacation from Dunder Mifflin to ensure that he wouldn’t sue the company for Michael’s actions, only to make his return later in season 3.

The scene is fantastic but the story behind it is even better.