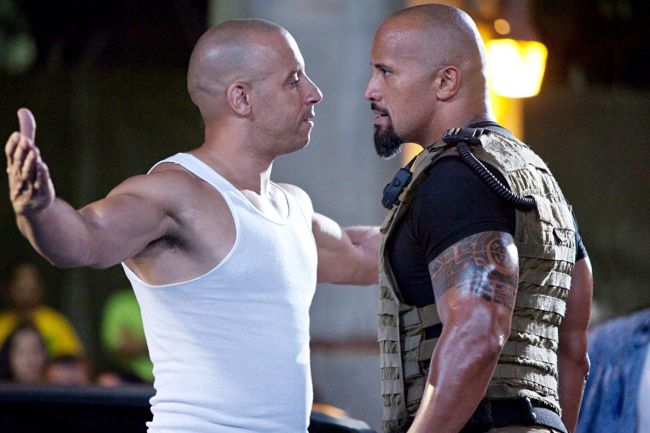 Pretty much exactly a month ago, I brought you the latest update of the years-long Vin Diesel/The Rock beef, titling the article Try Not To Laugh Out Loud At This Vin Diesel Quote About Giving The Rock “Tough Love”. I rolled with that word choice, simply, because it was the best summation of my feelings at that moment: pure bemusement.

“It was a tough character to embody, the Hobbs character. My approach at the time was a lot of tough love to assist in getting that performance where it needed to be,” Diesel said of working with The Rock on Fast Five.

“As a producer to say, ‘Okay, we’re going to take Dwayne Johnson, who’s associated with wrestling, and we’re going to force this cinematic world, audience members, to regard his character as someone that they don’t know’ – Hobbs hits you like a ton of bricks,” he continued. “That’s something that I’m proud of, that aesthetic. That took a lot of work. We had to get there and sometimes, at that time, I could give a lot of tough love. Not Felliniesque, but I would do anything I’d have to do in order to get performances in anything I’m producing.” [via Men’s Health]

For a man who has literally never put forth a complex acting performance in his life, the levels of arrogance were astounding. I wrote at the time, in fact, that I wished I lived my lift with such astounding ignorance — it’d be like living on your own planet. Nevertheless — perhaps it was because he was in the midst of filming Black Adam — The Rock didn’t respond to Diesel’s patently absurd claims. Until now.

In a recent interview with The Hollywood Reporter, The Rock absolutely torched Diesel, saying that he literally laughed out loud at the F9 star’s quotes:

When asked about Diesel’s comments, Johnson says, “I laughed and I laughed hard. I think everyone had a laugh at that. And I’ll leave it at that. And that I’ve wished them well. I wish them well on Fast 9. And I wish them the best of luck on Fast 10 and Fast 11 and the rest of the Fast & Furious movies they do that will be without me.”

Blunt can’t resist extending the moment. “Just thank God he was there,” she says of Diesel. “Thank God. He carried you through that.” “Felliniesque,” Johnson says. [via THR]

Man, The Rock literally hit ’em with a “We’re laughing at you, not with you.” Sometimes the simplest cuts are the sharpest. To be fair to Diesel, though, his resentment towards The Rock is understandable: there Diesel was in the early 2000s coming off The Fast and the Furious, thinking he had the Bald Action Star market vacated by Bruce Willis cornered and locked up for the foreseeable future. Then along comes the Most Electrifying Man in Sports Entertainment, out of the wrestling ring and into all of the starring roles Diesel thought he’d have, not only becoming one of the world’s highest-paid movie stars in the process but even taking away from Diesel’s shine in his *own* Fast franchise.