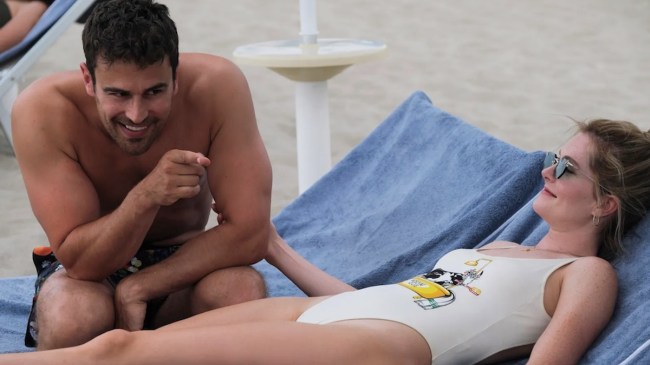 Leave it to HBO to find a series that I’d easily watch endless seasons of. Following an Emmy-winning first season, The White Lotus returned for its 7-episode second season back in late October and has already been renewed for a third. And for as long as creator Mike White keeps cooking up this combination of comedy, satire, tension, drama, and mystery, I’ll continue to tune in.

Similar to season one, season two has been full of breakout stars — even the established likes of Aubrey Plaza are getting praised for putting forth perhaps the best work of his career — and one of them is certainly Theo James, who plays the douchey investment banker (or something) Cameron Babcock.

The White Lotus certainly positioned Cameron to be a key character as he stripped down to his birthday suit in front of his buddy’s wife in the first episode — which is sure to be a moment that comes to blows in the season finale.

Speaking to Jimmy Fallon on The Tonight Show last week, James detailed the process of making the scene and hilariously compared the prosthetic dong he used to that of a donkey.

The actor recalled discussions he had with makeup head Rebecca Hickey. James said he told Hickey, “I just wanted it not to be distracting. It needs to be ‘Regular Joe.’ Because the scene, you know, it’s not about the pee pee, it’s about power play and sex. It’s about whether he did it deliberately or whether it was an accident and what that means. She says, ‘I got you. Yeah, I got you. Regular Joe.’”

When James saw the prosthetic, he joked about the size, which according to Hickey was regular. “I mean, it’s bigger than that. It’s like she stole it off a donkey in the field! The thing is ginormous.” [Variety via The Tonight Show]

The season two finale of The White Lotus will hit HBO and HBO Max on Sunday, December 11. The entire first season and the first six episodes of season two are currently streaming.