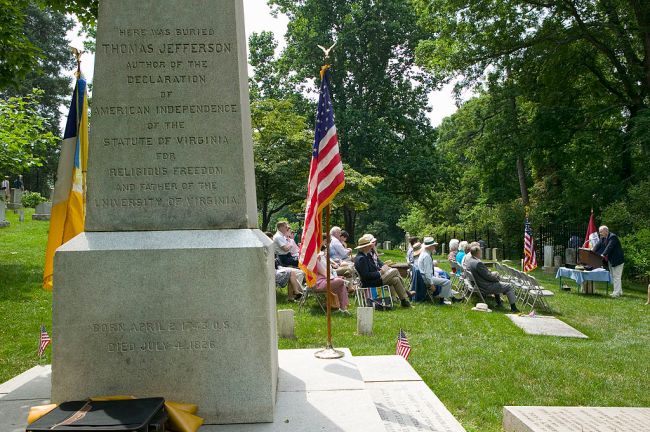 The University of Missouri must be doing fine financially – even with Covid-19 – because the school just dropped $20K on an acrylic case to protect Thomas Jefferson’s headstone.

The new acrylic vitrine is “one-half to three-quarters of an inch thick” and feels like it’s almost begging to be tested.

The case is in response to vandalism concerns. There’s an ongoing dispute on campus about whether the university should honor the former president and slave owner.

The headstone is Jefferson’s original from back in 1833. In 1883, it was replaced and given to the University of Missouri.

Jefferson is actually buried – as shown in the picture at the top of this article – almost a thousand miles away, in Monticello, Virginia.

There are two relics associated with the grave marker. The obelisk holds a replica of a marble plaque with the inscription Jefferson wrote for his grave: “Here was buried Thomas Jefferson; Author of the Declaration of American Independence; of the Statute of Virginia for religious freedom; Father of the University of Virginia.”

A university spokesman told the Columbia Tribune that the “case was installed because of vandalism to a Jefferson statue that is also on campus, and graffiti written on the sidewalk during the summer making reference to Sally Hemings, a slave who gave birth to children fathered by Jefferson.”

The school chancellor refused to remove the headstone this summer but put together a task force of students, faculty, and other administration to make recommendations about the future of the headstone.