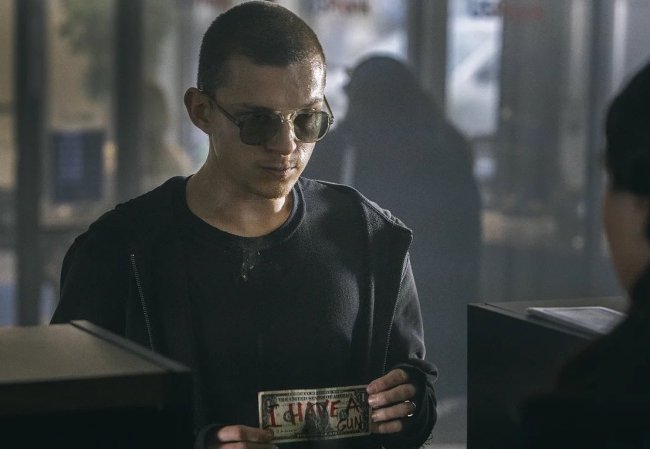 If there’s somehow still any left to purchase,  I’d advise going out and buying a ton of Tom Holland stock as soon as possible.

Mind-blowingly still just 24-years-old, Holland looks set to explode into one of the world’s biggest movie stars. Not only has he established himself as a blockbuster star thanks to his role as Spider-Man in the Marvel Cinematic Universe (and the upcoming Uncharted franchise), but he’s beginning to prove he’s got dramatic chops as well, as evidenced by his performances in Netflix’s The Devil All The Time and the upcoming film Cherry on AppleTV+.

Based on the 2018 novel by Nico Walker and directed by The Russo Brothers — in their first directorial work since helming Avengers: Endgame — Cherry follows Holland who plays “an Army medic with PTSD who becomes addicted to opioids and starts robbing banks to pay for the addiction.”

“We do think about it as an epic film, and it is very much a person’s life journey,” Anthony Russo told Vanity Fair. “But it does have a little bit of a split personality between being this character study and an epic life cycle.”

They described Cherry as six movies in one, spanning from the mid 2000s to the present. “He travels a great distance over a 15-year period,” Joe Russo said. “The movie’s broken up into six chapters that reflect those different periods, and each one has a different tone. It’s shot with different lenses, different production design. One’s got magical realism. Another chapter is absurdism. Another is horror…There’s a bit of gonzo in it. It’s raw in its tone. He’s a character in existential crisis.”

Directed by The Russo Brothers, CHERRY follows "an Army medic with PTSD who becomes addicted to opioids and starts robbing banks to pay for the addiction."

In addition to Holland, Cherry — which is set to be released in theaters on Thursday, February 26 before hitting AppleTV+ on Friday, March 12 — also stars Ciara Bravo, Jack Reynor, Forrest Goodluck, and Bill Skarsgård.