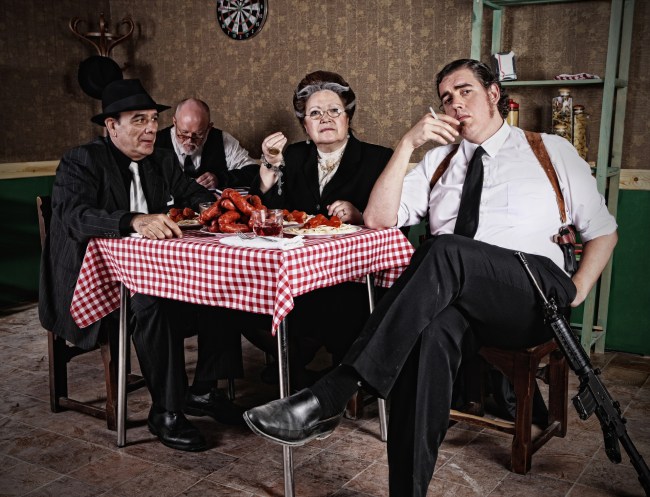 If you’ve been on Twitter at all in the past few hours you might have seen some weird names trending. A click or two will take you to the ‘Trending’ topics and you’ll see a release from the United States Attorney’s Office Eastern District of Pennsylvania which states 15 members of the Philadelphia Mafia have been indicted.

The 15 defendants includes “alleged” members of the “South Philadelphia and Southern New Jersey-based criminal organization La Cosa Nostra (LCN)” aka the Mafia. I just want you to prepare yourself to see ‘AKA’ a metric ton of times in this article because while all 15 of the defendants don’t have nicknames some of them have A LOT of nicknames and I thought we should grade the nicknames.

Here’s an excerpt from the DOJ’s release so you can see all fo the nicknames before we make mention of the best:

According to court documents, the Philadelphia LCN is one of a number of LCN organized crime families based in various cities throughout the United States. The purpose of the LCN in Philadelphia and elsewhere is to make money through the commission of various crimes, including illegal gambling, loansharking, drug trafficking, and extortion.

If it isn’t painfully obvious who has the best mafia nickname then I’m not sure we can be friends. The top honors clearly goes to 73-year-old Anthony Gifoli aka “Tony Meatballs” who I can only assume was gifted that nickname because some previous Mafia boss came to eat at his family’s house ONE TIME and saw Tony and saw a meatball and was like ‘kid, you’re now Tony Meatballs’ and that nickname stuck forever.

56-year-old Louis Barretta aka “Louie Sheep” might have the most interesting nickname of the lot. I cannot FOR THE DAMN LIFE OF ME wrap my mind around how a dude who shares the same name as a famous Italian gun company (Beretta / Barretta, whatever) went with ‘sheep’ as his nickname instead of something related to one of the most famous arms manufacturers on the planet. Was it really too on-brand to take a nickname based on guns? Why would he possibly have gone with ‘sheep’ instead??

41-year-old Domenic Grande is coming in STRONG on the leaderboard based strictly on his volume of nicknames. He goes by Domenick Grande aka “Dom,” aka “Mr. Hopkins,” aka “Mr. Brown,” aka “Dom14,” and I like to imagine when they meet at the clubhouse (it’s a treehouse on Tony Meatballs’ backyard) to discuss their quarterly earnings the person keeping minutes of the meeting has to read off every single one of Dom’s nicknames before the meeting can begin.

Steven Mazzone going with ‘Stevie’ is pure laziness but I can also see this as a power move. Maybe he went with something as vague as Stevie to open up the floor to challengers. He’s just waiting in the wings for a young mobster to come along and try to snatch the nickname ‘Stevie’ from him and that’s what he drops the hammer on Lil Steven’s knuckles.

67-year-old Daniel Castelli aka “Danny,” aka “Cozzy,” aka “Butch,” aka “Harry,” is just being selfish. Butch is a top-shelf nickname. Accept the singular nickname and move on. Stealing ‘Harry’ as a nickname when your name is Daniel makes NO DAMN SENSE and everyone knows that Hank is the superior nickname to Henry for anyone named Harold. These are the facts.

The full press release from the Department of Justice on these indictments is somewhat interesting if you’re an amateur historian who’s interested in the mafia. You can check out the DOJ’s press release here.