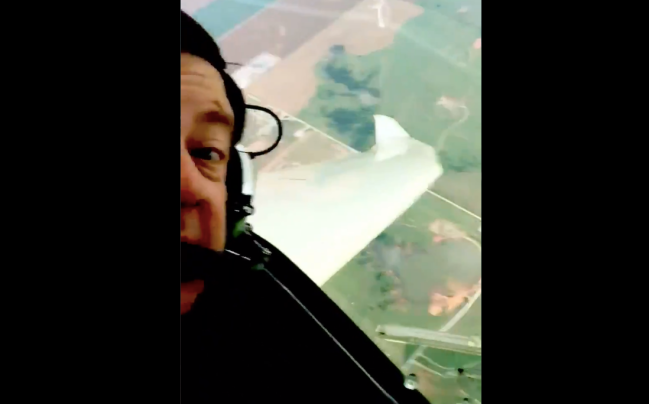 It’s one thing to be ballsy enough to be a pilot and, you know, actually go up thousands of feet above the ground. It’s another thing to be a pilot who is a serious thrill-seeker and is willing to risk his life even more by flying next to one of Mother Nature’s trickiest bastards: The almighty tornado.

Since I’m clearly a giant wussy who doesn’t foresee a moment in my life where I’ll do either of those things, I’ll just marvel at this pilot who filmed himself circling a tornado this past weekend. Take a look below at the wild footage, which was tweeted out by the guy’s wife.

It’s hilarious to think that the wife of this pilot, named David, was the one promoting the extreme footage to a local weatherperson. Good on her for getting her hubby some views on social media, but wouldn’t you think she’d be laying into him about being a moron for getting this close to a tornado? Most wives sure as hell would — and it’d be warranted.

We’ve seen tornados seriously mess up some things on the ground, so I’ve got to believe David was crapping his pants as he circled this giant tunnel of wind, unaware of what might happen had he gotten sucked into it. Well, OK, we all know what would’ve happened: Dude would’ve been a goner.

Luckily, the pilot stayed just far enough away to avoid any issues, and, in effect, gave us one of the most stunning videos I’ve ever seen. That might sound like sensationalism, but how many times have any of us seen somebody do this? I can count how many: One.

This David guy is a legend, and he deserves to be tracked down and asked if his balls are naturally this big, or if he was just feeling like a daredevil on this particular day. No one in their right mind just decides to do something like this, so I’ve got so many questions for this dude.

Turns out the pilot, David Payne, is a Chief Meteorologist, so he’s probably used to this type of stuff. That said, it’s still risky AF, so if you’ve got a pilot’s license, it’s probably best to avoid trying to duplicate this insane video.