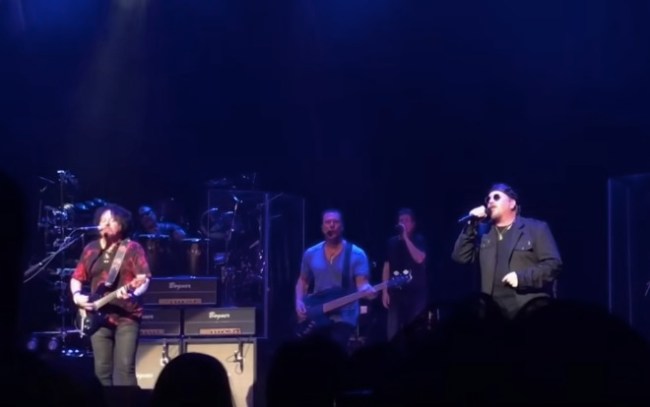 It appears as if we’ve been living in the upside down from Stranger Things for months. Everything seemed all honky dory when a diehard Weezer fan launched a months-long campaign to get Weezer to cover ‘Africa’ by Toto.

The band (Weezer) first teased fans pushing for a cover of ‘Africa’ by releasing a cover of Toto’s ‘Rosanna’. Then, days later, Weezer dropped a cover of Toto’s ‘Africa’ that sent Internet dorks into a full-blown frenzy that peaked when the band played the song live on Kimmel (that video’s below). Now, we’ve flipped the script and at a concert in Vancouver, British Columbia Toto busted out a cover of Weezer’s ‘Hash Pipe’.

Here’s that Weezer cover of Toto’s ‘Africa’ on Kimmel that I mentioned above:

It’s certainly an interesting song choice. It is one of Weezer’s more famous songs because of the radio success but if Toto was really looking to go viral they could’ve covered ‘Buddy Holly’ or ‘Say It Ain’t So’. If Toto covers one of those two songs then the video’s easily at #1 on YouTube’s trending page.

Also, for a band that peaked in the 1980s they chose a pretty high-pitched song. It’s not exactly a walk in the park to sing that high for a band that was formed in 1976 and only has one member under the age of 60. So I guess they deserve some props for not taking the easy route?