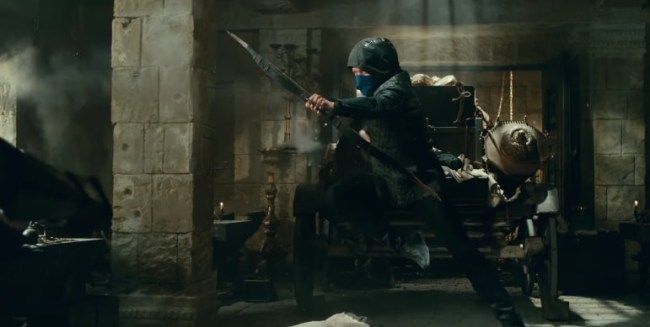 The teaser trailer for Robin Hood has all the same characters from the English folklore that has been around for centuries. Taron Egerton, who starred in Kingsman: The Secret Service and Kingsman: The Golden Circle as Eggsy and who’s next project is playing Elton John in a biopic, plays Robin Hood. Jamie Foxx joins Robin’s Merry Men as Little John and Jamie Dornan as Will Scarlett. Eve Hewson is Maid Marian, while perpetual bad guy Ben Mendelsohn is the Sheriff of Nottingham.

Here is the official synopsis for the 2018 version of Robin Hood:

Robin of Loxley (Taron Egerton) a war-hardened Crusader and his Moorish commander (Jamie Foxx) mount an audacious revolt against the corrupt English crown in a thrilling action-adventure packed with gritty battlefield exploits, mind-blowing fight choreography, and a timeless romance.

Otto Bathurst makes his feature directorial debut after heading episodes of Peaky Blinders and Black Mirror. This robbing from the rich and giving to the poor story gets an update and it definitely has an Assassin’s Creed vibe. Robin Hood hits theaters on November 21st.