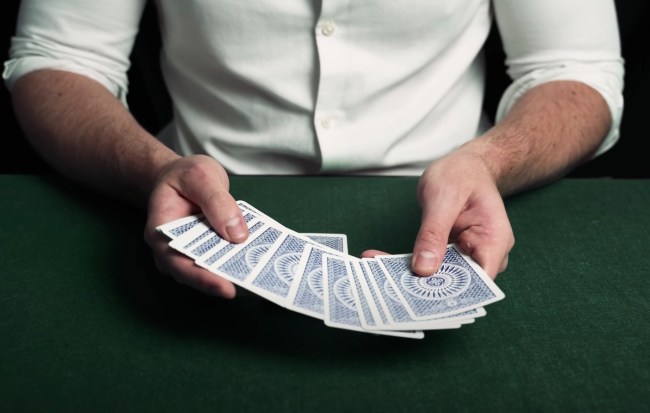 David Blaine is a living sorcerer. The dude can hold his breath underwater for over 17 minutes. He just rode some balloons into space like the old guy from Pixar’s UP. I’ve personally watched as he stuck needles through his body on stage at one of his magic shows. The man might not be an actual human being but he’s 100% an expert magician.

David Blaine has been in the industry for decades and is trained to spot every one of ‘oldest tricks in the book’ along with new card tricks and illusions. He’s pioneered so many illusions of his own that he’s able to see new ones coming from a mile away. But this card trick right here is one that fooled the master.

Magician Oscar Owen shows this trick in real-time so you can be fooled by it in the same way David Blaine was. Then he goes back and does it again and shows what exactly the magician is doing here. It’s not often you get to see the curtains peeled back and learn a trick like this so if you’re looking to learn a card trick and confuse your friends when you bust it out at the bar in a few months then this is a perfect tutorial.

I wish I could give you an editorial recap of what just went down and write the steps out one by one but that wouldn’t really work here. In order to master this particular display of sorcery that bested David Blaine you’ll need a deck of cards and you will likely need to watch this video countless times to nail the trick.

If you need a reminder of David Blaine’s sorcery when it comes to card tricks, here you go:

If you enjoyed that, Oscar Owen is the guy who produced this video and he has some cool tutorials on his channel. Here’s one about ‘8 impossible ring tricks’ which he claims anyone can master. I’m not sure I’ve ever seen anyone other than an actual magician do ring tricks but these are pretty intriguing.

Now go forth into the world with your new magic.