VIDEO: Ukrainian Flight 752 Was Shot Down By Iranian Missile System According To US Intelligence Officials And Justin Trudeau 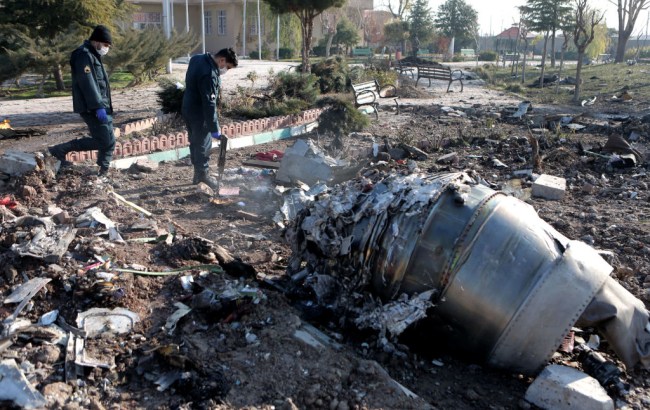 A new report from U.S. intelligence officials claims that Ukraine International Airlines Flight 752 was shot down by an Iranian surface-to-air missile. Pentagon officials allege that Ukrainian Flight 752 that crashed near the Iranian capital of Tehran, was hit by an anti-aircraft missile that caused it to crash, killing all 176 passengers on board.

Ukraine International Airlines Flight 752 was traveling from Tehran to Kiev on January 8, 2020. Less than three minutes after liftoff, the Boeing 737-800 airliner was climbing and had reached an altitude of 8,000 feet before the plane abruptly stopped transmitting data. Ukrainian Flight 752 crashed to the ground less than 10 miles from Tehran’s airport.

The airliner’s crash happened four hours after Iran launched a barrage of ballistic missiles at US and coalition forces in military bases in Iraq. This attack was in retaliation for the deadly U.S. drone strike attack on Iranian general Qassem Soleimani near the Baghdad International Airport last week.

The crash of Flight 752 was surprising for aviation experts, especially at Ukraine International Airlines (UIA) because the plane was only three and a half years old, and the aircraft was inspected only two days before the incident, and no defects or issues were found. UIA said pilot error was not a possible cause of the crash because the pilots had been trained specifically for Tehran flights for years.

“We know today that the plane was at 2,400 metres, so the chance of pilot error is minimal, we just aren’t considering it,” said Ihor Sosnovskiy, UIA’s flight director. “With their experience, it’s very difficult to say that there could have been anything with the crew.”

The Civil Aviation Organization of Iran Chief Executive Ali Abedzadeh said that they would not hand over the doomed airplane’s black box to any other country, despite allowing Canada and Sweden to cooperate in the investigation. Of the 176 people on board, 82 were Iranian, 63 were Canadian, 11 were Ukrainian (including nine crewmembers), 10 Swedish, seven Afghan, and three German nationals. With all 176 passengers and crew killed, this was the deadliest aviation disaster in Iran in more than a decade.

British Prime Minister Boris Johnson released a statement on Thursday declaring that the U.K. intelligence believes that the Ukrainian airliner was shot down.

“There is now a body of information that the flight was shot down by an Iranian Surface to Air Missile. This may well have been unintentional. We are working closely with Canada and our international partners and there now needs to be a full, transparent investigation,” Johnson said. “The U.K. continues to call on all sides urgently to deescalate to reduce tensions in the region.”

On Thursday, Canadian Prime Minister Justin Trudeau proclaimed that there was evidence that indicates Iran used a missile to shoot down the Ukranian airliner.

“We have intelligence from multiple sources, including our allies and our own intelligence. The evidence indicates that the plane was shot down by an Iranian surface-to-air missile,” Trudeau said at a news conference. “This may well have been unintentional.”

"We have intelligence from multiple sources, including our allies and our own intelligence, the evidence indicates that the plane was shot down by an Iranian STA Missile."#IranPlaneCrash pic.twitter.com/TcPwlUssVv

One of the allies with intelligence on the downed airliner was the United States. U.S. officials said that images from reconnaissance satellites show the aircraft was shot down by an Iranian surface-to-air missile. A senior U.S. intelligence official and an Iraqi intelligence official told Newsweek that the plane was shot down by Iran’s missile defense system. U.S. officials told The Associated Press that it was “highly likely” that Iran was responsible, and that the action was probably done on accident.

Military experts believe Iran’s Soviet-built Tor (SA-15) surface-to-air missile system took down the commercial airliner. Sources said that U.S. intelligence detected anti-aircraft radars turning on before the crash. Satellites detected two infrared blips, which are believed to be SA-15 missile launches. Those were followed by another blip, which is believed to be the airliner explosion.

On Thursday, President Donald Trump said that he did not believe that the airliner crashed because of a mechanical error.

“It was flying in a pretty rough neighborhood,” President Trump said. “Someone could have made a mistake. I have a feeling that — it’s just some very terrible, something very terrible happened, very devastating.”

JUST IN: President Trump on Ukrainian plane crash: "I have my suspicions… It's a tragic thing when I see that, it's a tragic thing. But somebody could have made a mistake on the other side." https://t.co/XFrqZJEPns pic.twitter.com/pm4npge5xV

Oleksiy Danylov, the secretary of Ukraine’s National Security and Defense Council, said they are considering a variety of explanations for the plane’s crash, including the airliner being shot down, an engine explosion, a terror attack, and collision with a drone.

Abedzadeh said that the claims that Iran shot down Ukrainian Flight 752 were “scientifically impossible and such rumors make no sense at all.” Iran’s reasoning is that there were several domestic and foreign flights in the area at the same time and at the same altitude.

There is a video being circulated online of the moment the Ukranian jetliner was hit by a missile. Human Events journalist Ian Miles Cheong shared the video with the caption: “Video footage of an Iranian Tor M1 missile bringing down the 737-800, Ukrainian International Airlines flight PS752. This certainly contradicts Iran’s “engine failure” narrative.”

The New York Times has verified the video of the plane being struck above Parand, near Tehran’s airport, as well as independent freelance journalist Sotiri Dimpinoudis, who said he “did metadata of the video footage and geolocation, after the release of the video” to conclude that it was from Iran at the time of when Ukrainian Flight 752 crashed.

#Update: And here is the disturbing video of the moment the Ukrainian Boeing passengers plane crashed on the ground in Iran.#Iran #Iraq #Ukraine #US #Canada pic.twitter.com/YchyrWAlCQ

There are unverified reports that Iran has used bulldozers to “clean up” the entire jetliner crash site.

#News: A lot of reports coming out that #Iran has damaged the entire crashsite of the Ukrainian Boeing that crashed in the heat of attacks against #US military bases in #Iraq, the crashsite has almost been cleaned up entirely by bulldozers, tampering with evidence.

Images via Maxar show the #UkrainianAirlines crash site in #Iran, debris, SAR vehicles & general area help understand the unfortunate incident that is yet to be declared either a shootdown or technical fault pic.twitter.com/GR6nJcXpwY

There are unverified reports and photos claiming to show Tor missile fragments at the Ukraine International Airlines Flight 752 crash site.

Second image (right) of Tor anti-aircraft missile debris, supposedly from near the #PS752 crash site. Still unverified, and still going to be very hard to geolocate it based on what's visible in the image. h/t @Liberalist_30 pic.twitter.com/TQNRp6hopj

A number of people have asked why the front of the Tor missile survives intact. As the below diagram shows, the warhead (marked 13) is not in the front of the missile, but about midway. Source https://t.co/msvYkwyEwq (h/t @cthulhu985) pic.twitter.com/Z4rhrHXf8D

This is the TOR-M1, also known under its NATO designation as the SA-15 "Gauntlet". It is the surface-to-air missile system that shot down Ukrainian International Airlines flight PS752.

Footage is from Iran's State TV IRIB, circa mid-2000s. pic.twitter.com/4eJlXj0SjZ

Tensions between Washington and Tehran are still flaring at high levels, and Iran is promising more retaliation for the death of their leader of The Quds Force, which is a covert unit in Iran’s Islamic Revolutionary Guard Corps (IRGC). Meanwhile, the rest of the world braces for a potential World War III.