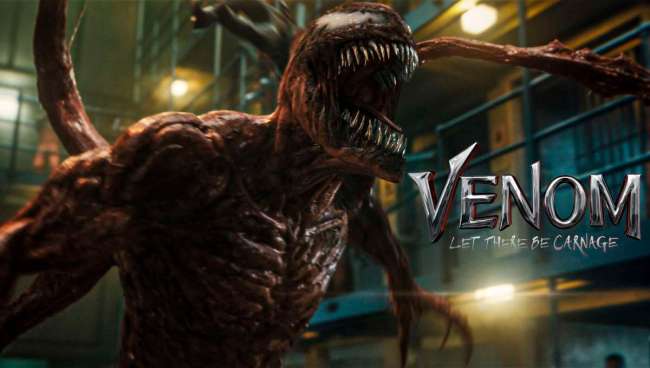 I’ve long said that one of my greatest personality strengths is that I know what I don’t know. I’ll never be embarrassed to admit when I don’t know certain things, regardless of how important they may be, and won’t shy away from asking someone who does. While some might see acknowledging your faults as a point of weakness, I see it as merely being more in tune with my strengths, therefore allowing me to further capitalize on them. Self-awareness, if you will. When something sports-related happens that’s worth writing about here on BroBible, I’ll pass it on to a far more informed colleague. Conversely, though, whenever something pop culture-related comes along, everyone knows whose virtual desk to send it to: mine.

This, ultimately, is what makes Venom: Let There Be Carnage an instantly elite entry into the “So Bad It’s Good” Movie Hall of Fame, as it leans into its absurdity with such aggressive and self-aware flare that you simply can’t help but respect it. The primary genre of Let There Be Carnage is absolutely comedy, and in that regard, it nails it: this is not only a legitimately funny movie but a movie that can tout humor as its primary weapon.  Let There Be Carnage knows what it is and capitalizes on that the best it can, epitomized by Tom Hardy’s thoroughly and therefore comically committed performance as both Eddie Brock AND Venom, which is a key distinction as they’re two separate characters that are each given their own comedic beats. Hardy’s voice-work as Venom is the true star of the show.

As for the plot and the action and the performance of the supporting cast, none of that seems to matter to Let There Be Carnage, which flies through its 89-minute runtime at a breakneck pace, barely giving its titular villain anything to do other than break out of prison and raise hell for a couple of hours. What exactly he wants beyond reuniting with his equally insane counterpart (Naomie Harris’ Shriek) is not only undeveloped, it’s entirely irrelevant. Part of the benefit of knowing what you are and what you’re not is efficiency and that’s on display in the film despite its inherently rushed nature. In a traditional superhero movie, the lack of suspense in the plot would effectively kill any maintained interest, but that’s the thing about Let There Be Carnage — it’s not even remotely concerned with being a traditional superhero movie. All Let There Be Carnage wants to do is give Hardy and Woody Harrelson the runway to act as absurd as they possibly can.

The #VenomLetThereBeCarnage post-credit scene where Venom fights Neo and Ceasar from Planet of the Apes, thus forming the Golden Gate Bridge Cinematic Universe, is admittedly insane.

Ultimately, Let There Be Carnage asks you what you want from your superhero films, as it exists on the opposite end of the spectrum of, let’s say, Eternals, which will be the next film in the Marvel Cinematic Universe. If you want sweeping and superheroic scope, scale, and stakes, then perhaps Let There Be Carnage isn’t for you. But if all you desire is an hour-and-a-half of two cosmic goop monsters cracking one-liners about eating chicken brains, then welcome, because we are Venom.

Venom Let There Be Carnage hits theaters in the United States on Friday, October 1.