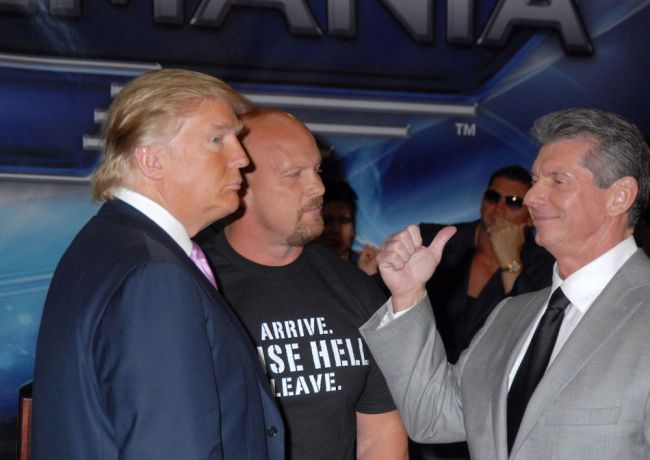 President Donald Trump and WWE Chairman Vince McMahon have a friendship dating back to the mid-1980s.

Trump held several WWE events in his casinos and McMahon even put “The Donald” in the WWE Hall of Fame.

The most famous moment in the Trump and WWE relationship during the lead-up to the “Battle of the Billionaires” at WrestleMania 23 which eventually saw Trump shave McMahon’s head in the middle of the ring.

On a recent episode of “Talk is Jericho,” former WWE writer and MLW founder, Court Bauer, recalled the build-up to the event.

He broke down when Trump appeared on an episode of “WWE Raw” to faceoff against McMahon.

“We’re doing some sort of in-ring deal with Trump and Vince and it was cold because it was the lead-up to WrestleMania,” recalls Bauer. “Donald has that big winter jacket and he’s 6′ 4″ or something like that. He’s kind of a deceptively tall guy.”

Here’s what went down.

Bauer remembers the chairman being absolutely livid after the show was over.”

“So, they’re doing a promo, and Vince and him are going face-to-face as the Battle of Billionaires thing goes down.

Afterward, we’re in the limo, and Vince is just livid.

They get along great, but there’s that kindred spirit thing with them and everything.

He felt like Donald had intentionally shown him up and he’s like, ‘Did you see that? He was wearing that jacket, clearly his shoulder pad was stuffed to look bigger than me, it’s ridiculous.’

And he was really hot about Trump trying to look bigger than him.

I think the next time out Vince was jacked and everything. He would not have any of it.”

That’s right. A man who spent his entire life working out felt slighted by a man wearing a big coat who never does anything athletic – besides cheat at golf.

During that same feud, a “Raw” segment involved a contract signing with the future president sending the WWE owner over a table.

Bauer also shared Vince’s philosophy on dealing with celebrities with Jericho. If the storyline called for punches or a physical altercation, McMahon told celebs to not hold back.

“It’s funny too because Vince, whenever he would work with a celebrity or a wrestler, he would say, ‘just hit me, just go for it, don’t hesitate to hit me, don’t make it look fake, don’t worry, I’m not going to get upset if you tag me, I potato everyone all the time, so don’t worry about it.’

He wanted it to look real rather than it not look credible.”

[via Talk is Jericho | transcription via 411 Mania]