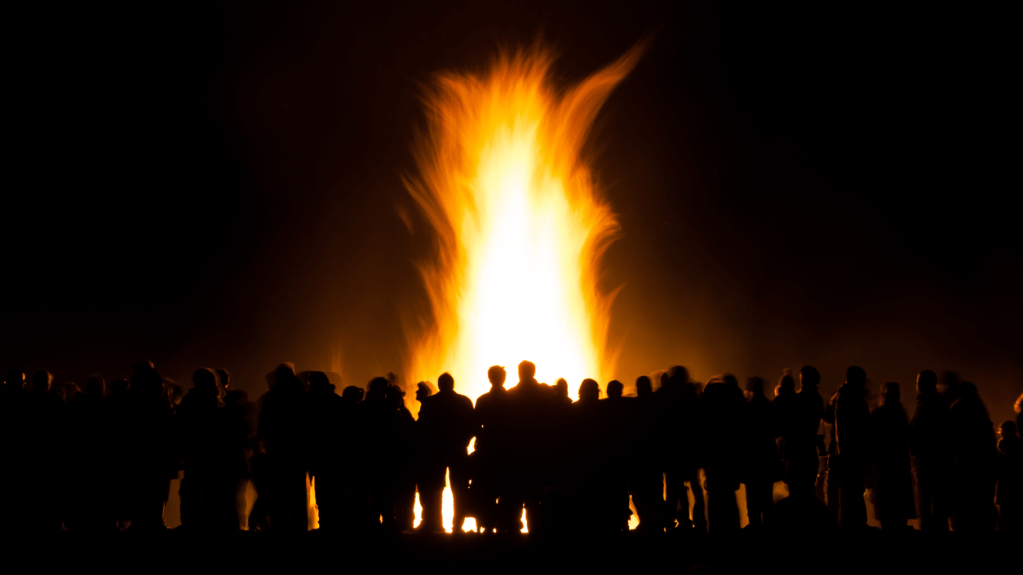 A violent bonfire explosion during the Mosley High School homecoming in Florida was caught on video and thankfully nobody was injured. Upon reviewing the footage of this instant explosion, it’s frankly a miracle that nobody was injured due to the size of the blast.

The incident occurred at A. Crawford Mosley High School in Lynn Haven, Florida which is just north of Panama City in the Florida Panhandle. And the Mosley Bonfire is a long-held tradition at the school stretching back generations… until now.

After the violent bonfire explosion immediately after a deputy stepped forward to ignite the ceremonial fire they released a statement saying they are “officially out of the bonfire business.”

Thankfully, nobody was injured according to local news reports. Shortly after the bonfire explosion, Lynn Haven Sheriff Tommy Ford released the following statement:

“Tonight, there was an incident at Mosley High School where the annual homecoming bonfire exploded. This has been a tradition at M. ,” Ford said in a statement. “The deputy that set up the bonfire has done so at Mosley for the last 7 years. We are not sure yet what caused the explosion, but take responsibility for the incident.”

“Safety precautions were in place, to include the fire department on site and the students positioned at a safe distance behind a fence, that prevented injury or fire but it still should not have happened. We apologize for any distress this has caused and I assure you that we are officially out of the bonfire business.”

More On The Mosley Bonfire Explosion

“We’d like to start by noting how incredibly grateful we are that our customary safety protocols ensured no students were standing adjacent to the bonfire at the time it was lit. We are also very happy to report that our deputy was unharmed in the explosion, even though the videos might indicate otherwise. And, before we go on to discuss what we’ve learned from this, we would also like to apologize to all of those who were disturbed by the explosion last night. We know that was very frightening for many of our students, staff and for neighbors who live close to the school, and we are very sorry for all of that.”

“Bonfires at high school homecoming events have been a part of our schools for at least the last 50 years. They are always conducted in conjunction with law enforcement and fire departments, and safety is always paramount. Last night’s bonfire was constructed the same way it has been for decades. As recently as yesterday, we checked in with area first responders who coordinate this with us each year to ensure we had done everything needed to proceed, and we were given permission to go ahead. We are aware that residents are being asked to exercise caution while burning yard debris etc., and we believe that the on-site presence of both law enforcement and firefighters added to our existing safety protocols for the protection of our students, our campus and our community.”

“Even though last night’s situation was definitely a worst-case scenario for us, our standard safety protocols and the availability of first responders on the scene ensured that no one was hurt and that the fire was quickly contained. Safety is always our number one priority however, so we have made the decision to prohibit any bonfires, or similar events, on any of our campuses going forward.”

“Again, we are incredibly grateful that no one was harmed last night and that first responders quickly eliminated any fire threat from the bonfire. The homecoming bonfire has been a wonderful tradition for generations of students and while we’re saddened to see that tradition end, we will always make decisions that err on the side of caution when it comes to safety.”

Related: NEVER use a gas can to start a bonfire or you’ll get a bonfire explosion!

Don’t try this at home.

The Mosley Dolphins are 4-2 so far this season. They won their season opener in a 24-23 nailbiter. Mosley hit a bit of a hot streak in Weeks 3 and 4, putting up scores of 42-7 and 42-0 so it is evident the Dolphins can score when things are going well.